Rinaldo Massoni purchased Café Denat in Bourke Street, Melbourne and changed the name to Café Florentino. Now called Grossi Florentino, it is Melbourne’s oldest restaurant. Restaurant dynasties like the Massoni and Triaca families emerged in the 1920s.  However, Italian culinary traditions had little immediate impact on the domestic cuisine of the Anglo middle-class family.

Café Denat, owned by the Swiss-born Calexte Denat and his wife Mary, was one of Melbourne’s earliest fine restaurants. It originally opened in Little Collins Street in 1893 and was relocated several times before it was bought by Samuel Wynn, a local wine merchant, in 1920. Wynn moved the business into premises above his wine shop in Bourke Street in 1925. Rinaldo Massoni was hired by Wynn as the manager and three years later bought the business.

Until then, Café Denat had advertised itself as a French restaurant. Under Massoni’s ownership, the cuisine became more Italian. To reflect this change, the name was changed to Café Florentino.  In 1935 the restaurant expanded into the next-door premises and  the famous murals, depicting scenes of Tuscany and historical figures of Italy, were painted on the walls of the new room. The Mural Room remains the most desirable section of the restaurant. 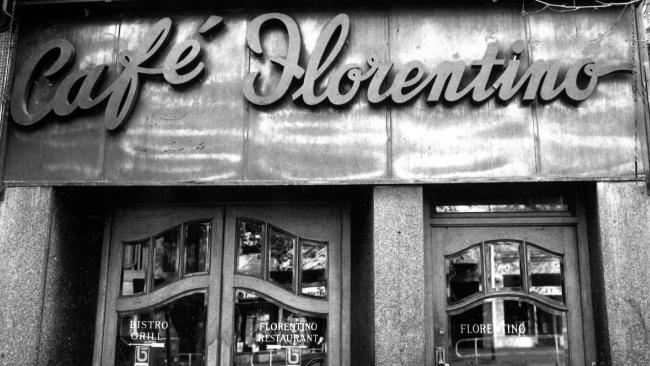 Massoni continued to run Café Florentino until his death in 1941. In 1946, when he turned 21, Rinaldo’s son Leon took over, soon forming a partnership with George Tsindos. In 1956 the pair opened the Cellar Bar serving more informal,  countertop meals, and three years later opened the Bistro Grill on the ground floor, designed by noted architect Robin Boyd.

The partnership lasted until 1963, when Tsindos bought Massoni out.  He then continued to run the restaurant until 1979. There were two further changes of ownership until Pietro Grossi returned the Café Florentino to Italian hands in 1999. Now known as Grossi Florentino, it is run by Pietro’s son Guy.

Café Florentino was one of the last restaurants in Melbourne to relax its dress codes. Until the Grossi family took over in 1999 it was obligatory for gentlemen dining upstairs to wear a suit jacket.  Even though you can now wear jeans, the upstairs restaurant maintains its upmarket position. As of early 2019, three courses would set you back $150, not including wine.