The Carlton Brewery had been operating in Bouverie Street, North Melbourne, since the 1860s, but in 1907 it united with the Foster’s, Victoria, Shamrock, McCracken and Castlemaine breweries to form Carlton & United Breweries (CUB).  In the same year, the letters VB were first added to the label of the Victoria Brewery’s Bitter Ale. The CUB website has a timeline with some wonderful old photos.

Given the way Carlton & United monopolised the Victorian beer market for many years, it’s easy to forget the multiplicity of breweries that preceded it. While the first supplies of beer were imported from Tasmania by J. P. Fawkner, brewing arrived in Melbourne within a few years of first settlement, when John Mills opened The Melbourne Brewery in 1837. He was soon followed by others, and the first Mayor of Melbourne, Henry Condell, was a brewer.

During the 1850s, as the gold rush swelled the population, breweries proliferated. The McCracken Brewery opened at the western end of Collins Street in 1851. In 1854, the Castlemaine Brewery was established, followed in 1854 by the Victoria Parade Brewery – birthplace of Victoria Bitter. 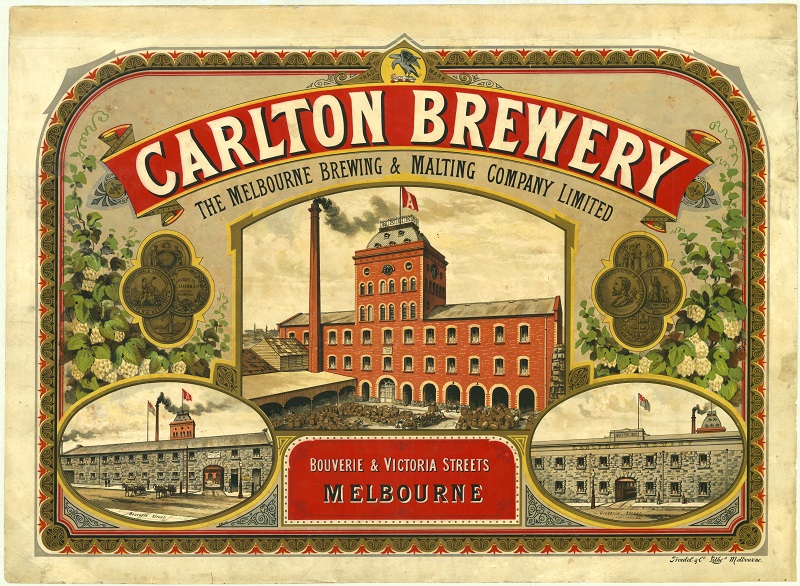 The first brewing operations on the site of what would become the Carlton Brewery were commenced by Theodore Rosenberg’s Union Brewery in 1858.  In 1864, an English immigrant named Edward Latham bought the business and renamed it the Carlton Brewery. The following year Shamrock brewery began under the name of its owner, Thomas Graham. The final partner in what would become Carlton & United was Foster’s Brewing Company. The Foster brothers were Americans, who used an innovative refrigeration process to create a lager beer, floated the company, sold out and promptly returned to America.

Before uniting into one company, the major brewers formed a cartel known as the Society of Melbourne Brewers. The objective was to raise the price of beer at a time when the temperance movement was pushing for increased taxes and agitating to close hotels. In 1907, under the guidance of the chairman of Foster’s, Montague Cohen, the companies merged to form Carlton & United Breweries (CUB).

The Co-operative Brewery at Abbotsford was backed by a number of hotels and remained independent until 1925, when it, too, joined Carlton & United. This gave CUB a virtual monopoly, with many hotels ‘tied’ to its beers. This situation wasn’t to be challenged until 1966, when the British-based Courage made a gallant but doomed attempt to break into the Victorian market.