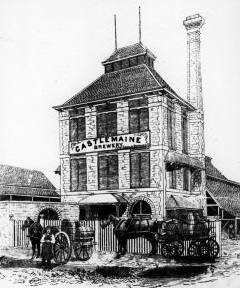 However, the South Melbourne product soon became successful and Castlemaine Brewery Co (Melbourne) Ltd became a public company in 1885. It was one of the five companies that merged in 1907 to form Carlton & United Breweries and Nicholas Fitzgerald was one of the directors on the new board.

The brothers opened breweries in Sydney, Newcastle, Daylesford and Newbridge. In Queensland, they formed a partnership and founded the brewing company Fitzgerald, Quinlan & Co. They built a brewery in Milton, an inner suburb of Brisbane, and within 12 months had produced their first beer. It was described in the Brisbane Courier as “…a delicious ale of the brightest amber, pleasant to taste, with a peculiarity of flavour not easily described and an aroma of an appetising nature by itself”.

Meanwhile, another Irishman, Paddy Perkins, had established what is claimed to be Queensland’s first brewery at Toowoomba. The Downs Brewer, more generally known as the Perkins brewery, began production in 1867. Perkins later opened a second brewery in Brisbane and in 1928, the two companies merged, to form Castlemaine Perkins. The Downs Brewery ceased brewing in 1958 after operating continuously for 89 years.

In 1979, Castlemaine Perkins merged with the Sydney brewing company Tooheys, to form Castlemaine Tooheys. This in turn was bought by the Bond Corporation in 1985, during the heady days of corporate raiders. Japanese-owned Lion Nathan acquired Castlemaine Perkins in 1992 and trademarked the Castlemaine name for brewing in Australia. The brand is now owned by Lion, a division of the Japanese Kirin group.