One of the all-time favourites in the Peters range, Choc Wedge was a new variant of the vanilla icecream/chocolate coating combination that began with the Eskimo Pie. It had a distinctive wedge shape and came on a stick for convenience. 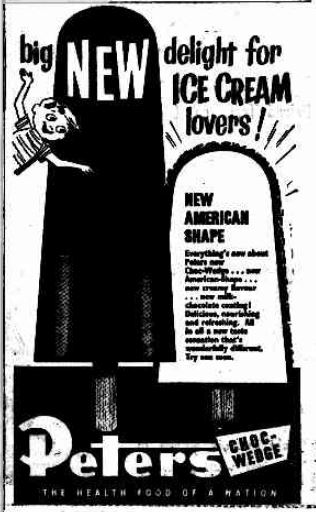 In 1959, the product was re-vamped with a ‘new American shape’ and advertised as having a  new creamy texture and a new milk chocolate coating. Over the years there were more changes. In the early 1980s, Choc Wedge was advertised as “The Daddy of them all”. At that time it came in vanilla, spearmint and choc-malt varieties.

However, over time, it appears that the composition of the product has changed. The centre is now ice confection rather than ice cream, while the Choc Wedge now has “choc-coating” rather than true chocolate on the outside. Many purchasers seem to be dismayed at the change and blame the change of ownership of the Peters company for a decrease in quality. One such review, posted in 2011 reads:

Choc wedges were always good for the price, until I tasted the last pack. I was extremely disappointed to find out that the ‘ice cream’ no longer tastes like ice cream. If you can imagine, water in white frozen form this is exactly what the ‘ice cream’ in the choc wedge tastes like. It literally tastes like N-O-T-H-I-N-G. It doesn’t even have the same texture as ice cream! Huge, massive disappointment…why do they always have to scrimp and save? No wonder the box of 12 was only $4.