While coffee seed arrived with the First Fleet, the sprouted plants soon withered in the Port Jackson climate. Experiments with growing coffee continued, however, and by the 1880s there were plantations in Queensland and Northern New South Wales. In 1899, 29 coffee growers met in Cairns to form the first Association. Coffee growing persisted into the 1920s, but declined owing to labour shortage, climate challenges and, during WWI, shipping problems.

Coffee was among the plants and seeds unloaded from the ships of the First Fleet. The journal of a ship’s surgeon, Dr George B Worgan, records that:

The Spots of Ground that we have cultivated for Gardens, have brought forth most of the Seeds that we put in soon after our Arrival here, and besides the common culinary Plants, Indigo, Coffee, Ginger, Castor Nut Oranges, Lemons, & Limes, Firs & Oaks, have vegitated from Seed, but whether from any unfriendly, deleterious Quality of the Soil or the Season, nothing seems to flourish vigorously long, but they shoot up suddenly after being put in the Ground, look green & luxuriant for a little Time, blossom early, fructify slowly & weakly, and ripen before they come to their proper Size. Indeed, many of the Plants wither long ere they arrive at these Periods of Growth.

Some early settlers continued the attempts to grow coffee. One Vernicourt de Lamb, meeting an untimely end during a Government dance, was buried according to his wishes among the coffee trees he had successfully cultivated at Castle Hill. Coffee was selling at 13 cents a pound in 1804 and continued to be imported through the first half of the 19th century. By the middle of the century, coffee stalls were operating from hawkers’ carts in many towns and cities. 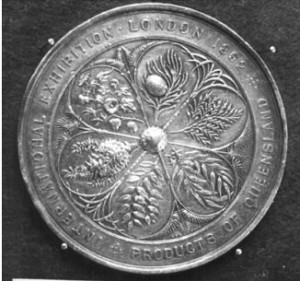 Coffee growers in Northern New South Wales and Queensland were more successful. In 1861, surveyor James Warner received a silver medal at the London International Exhibition for coffee beans grown in his garden at Kangaroo Point in Brisbane. In 1879 coffee was reported growing near Gympie. The following year coffee was included in a “collection of economic plants contributed by the Acclimatisation Society of Queensland” which won a gold medal at the International Agricultural Show in Sydney. The Sydney Morning Herald reported that “The samples of coffee, beans, and tea show that both can be grown in Queensland, but their production is not yet a prominent industry”.

Coffee plantations were subsequently established in various parts of Queensland, particularly on the Atherton Tablelands, near Mackay, at Buderim and at Bingil Bay. By 1893, there was interest in coffee growing in the northern rivers area of New South Wales, although cultivation was still experimental.  The coffee they planted was of the Arabica variety. By 1899, some 46 coffee growers were established in the Cairns region, of whom 29 attended the inaugural meeting of the Cairns Coffee Growers Association.

The fledgling industry soon encountered problems. Initially, planters used Kanaka (South Sea Islander) labour to tend and harvest their coffee crops. However, the ‘sugar slave’ system that had existed in Queensland since 1863 was coming to an end and, with the introduction of the ‘White Australia’ policy in 1901, it became impossible to rely on a cheap labour supply.

The climate also took its toll. Some of the higher plantations were blighted by frost, there were droughts, and a series of cyclones also damaged plantations. A tsunami that hit Mackay and Bowen in 1918 caused utter devastation as a 40ft (12 metre) wall of water rolled over the coast. Transport was also an issue. With the advent of World War I, the coastal trading ships were co-opted for military purposes. It may also be that the sugar industry proved more attractive to growers.

All these factors led to the decline of the industry in Queensland, although Government support in selling the coffee growers’ crop was offered in 1920. At this time, Australia was importing around 116 tons of raw and kiln-dried coffee as well as about 86.5 tons of coffee and chicory roasted and ground or in liquid form. With the local industry dormant for nearly 100 years, imports continued to account for most of our coffee consumption.  A resurgence in interest began in the 1980s, with the Mareeba/Atherton region now producing most of Australia’s annual harvest.