Testament to the growing importance of global brands, the Coca Cola advertising  agency, McCann –Erickson opened an Australian office in 1959. Coke’s ad agency quickly won the business of local brands and adopted the local vernacular, creating campaigns such as ‘Louie the Fly’ and the ‘It’s time’ campaign that propelled Gough Whitlam’s Labor Party into office. It also created the giant ‘Coke’ sign that is a landmark in Sydney’s Kings Cross.

McCann (as it is now known) had been Coke’s advertising agency for four years, having been assigned the business in the United States in 1955 as part of a plan to consolidated and integrate U.S. and international advertising. The American agency created Coca-Cola’s “It’s The Real Thing” slogan and advertising campaign, including the famous 1971 commercial that featured the “I’d Like to Buy the World a Coke” jingle. 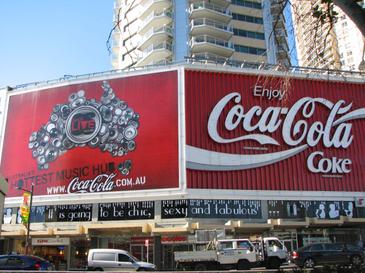 In 2016 the lettering of the Coca Cola sign was auctioned off and funds donated to the Wayside Chapel, a charity organisation that cares for the socially disadvantaged at Kings Cross. It was replaced with an LED sign that consumes far less energy.

McCann was not the only international advertising agency to open offices in Australia. The proliferation of global brands encouraged American and British agencies, including Ogilvy, BBDP, Grey, Leo Burnett and others to open offices here or to buy into local agencies. Until the early 1990s, to protect the local film industry,  it was a requirement that all television commercials aired here either be made in Australia or have a proportion of Australian crew and cast. This effectively prevented global agencies from simply using material produced overseas for Australian campaigns. These restrictions no longer apply.