Colvan has a long and complicated history. Colvan’s founding is said to date back to 1942. Ted Mayes, racehorse owner and a partner in the Nuttelex margarine company, claimed that if it rained the outsider Colonus was a good bet for the Cup. In one of the wettest Melbourne Cups in racing history, Colonus won by seven lengths.  Mayes had evidently backed his hunch and with his winnings bought a chip company, naming it after his sons.

The Colvan name began to appear in Melbourne’s Argus newspaper in 1953, advertising in a column called Clues and News by Suzy.

As well as potato chips and potato straws, the company made Colvan table margarine. It was manufactured in Fitzroy, Victoria, in a factory previous owned by margarine makers Birmacley Products Py Ltd. The factory is still standing, but is now the Aboriginal Housing 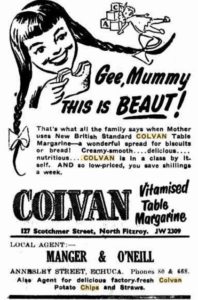 It seems that quite early on Colvan owned the Samboy name as it was advertised on the back of their 5c Potato Straws snack pack, along with Bacon Chips, Chicken Chips and Colvan Curlies. Curlies seem to have been a competitor for Twisties. In the early years of television Colvan Chips were promoted by Graham Kennedy on In Melbourne Tonight. The commercials were live to air and in one instance Kennedy famously ranted about the amount of air in the pack, tipped the chips onto the desk and smashed them into crumbs. 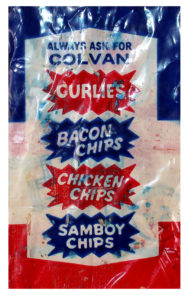 In 1964, Colvan underwent the first of many ownership changes. The company was acquired by Arnott’s, the biscuit manufacturers. It formed a foundation for the launch of Arnott’s Snack Foods in 1967. An early promotional line was “Colvan’s got enjoyment in the bag”.

In 1970 Arnott’s promoted Colvan Chips with a TV campaign using chimpanzees. The idea was copied from a Tetley’s Tea campaign in the UK, but proved successful in Australia. At some point during the Arnott’s ownership, Colvan Thins were launched. At first, they weren’t crinkled but were simply thinly sliced.

In the early 1980s, Samboy was launched as a stand-alone brand with the catch-cry ‘The flavour really hits you’. Commercials showed hapless characters being handed packs of the various Samboy flavours – including salt and vinegar, chicken, cheese and onion and, the big one, barbecue – whereupon giant versions of the flavouring ingredients fell on their heads.

Then the merry-go-round of ownership began. In 1983, Arnott’s sold half their snack food business to the Australia subsidiary of PepsiCo Inc. which, through Frit~Lay Inc., is the largest snack food company in the U.S.A.  Then, in 1991, Arnott’s Snack Foods was sold in its entirety to their competitor The Smith’s Snackfood Company. Pepsico then bought Smith’s in 1998 and, to satisfy the anti-monopoly laws, sold some brands to a company called Snack Foods Limited, which was in turn purchased by Arnotts in 2002. Are you still with me? 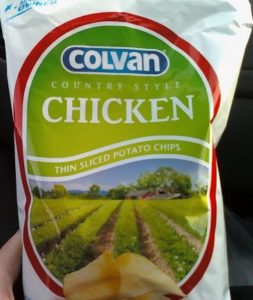 But wait, there’s more. In 2008, Arnott’s (which had been wholly owned by the American soup company Campbell’s since 1997) decided to get out of the snack food market altogether. So the business was sold to an Australian-owned group called The Real McCoy. After this, the Samboy packs proudly trumpeted their all-Australian ownership.

The Colvan name is not mentioned in connection with this change of ownership, with reports of the  transaction naming Kettle Chips, Thins, Cheezels, CCs, French Fries and Samboy. But although the last reported siting of Colvan Chips was in around 2003 the pack shown here also has a “Proudly Australian owned” tag in the top corner, which would date it after the Real McCoy transaction.

So it’s not likely we’ll see a re-emergence of Colvan Chips, but will have to be content with their descendants, Samboy and Thins.  And even those can be hard to find.