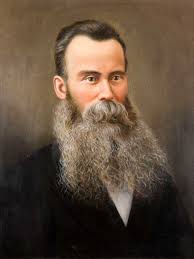 Thomas Cooper’s first recorded brew was made from four bushels of English malt and eight pounds (3.6 kilograms) of Kent hops in 46 gallons (2.9 litres) of water, fermented as a pale ale and a heavier ale. The Coopers brewery is still owned and operated by the Cooper family and is the only major Australian brewery not in foreign hands.

Thomas Cooper was the youngest of twelve children and was born in Yorkshire in 1826. He sailed for Australia with his pregnant wife in 1852. He was a tradesman and followed various occupations over the next ten years working as a shoe-maker, a mason and then a dairyman.  But as a Yorkshireman, perhaps it’s not surprising that he turned to brewing.

Yorkshire is renowned for its real ales. Cooper’s home town of Skipton is now host to a beer festival featuring some 80 different beers, with traditional names like Sam Smiths, Black Sheep and Theakstons lining up alongside the likes of Elland Nettlethrasher and Great Heck Voodoo Mild.

The legend goes that Thomas first brewed some beer as a tonic for his sick wife, Ann. She was a publican’s daughter and Thomas used his father-in-law’s recipe. Unlike other beers being produced in Adelaide at the time, it didn’t use added sugar and was fermented  in the bottle. It must have found favour with the locals, because after a year of juggling the brewing operations and the milk-run he sold the dairy to concentrate full time on beer.

Initially, Coopers beer was supplied only to private customers, not to public houses. However, its popularity grew making it necessary to move to larger premises. Thomas died in 1897 leaving the business to his four eldest surviving sons. Of his 19 children and two wives, one wife, seven sons and two daughters survived him.

The business initially operated as a partnership but was incorporated in the 1920s.  It’s now into its sixth generation as a family company. Coopers claim still to make naturally conditioned ales and stouts  using the same traditional brewing methods that Thomas did.