Courage Beer attempted to break the stranglehold Carlton & United had on the beer market in Victoria with its launch on Thursday 10 October, 1968. Despite introducing a range of brands and an eventual take-over by Tooths in 1978, Courage was unsuccessful. This was in large part because of the system of ‘tied pubs’ which meant CUB controlled much of the distribution chain.

Until the 1980s, beer drinkers in Australia were fiercely parochial. If you were in Victoria, you drank one of Carlton & United’s beers. If you were in New South Wales, it was Resch’s, Tooths or Tooheys. In Queensland, XXXX. And so on.  Victorians might grudgingly admit that Boag’s from Tassie wasn’t a bad drop, but in pubs the offerings were generally restricted to Victoria Bitter, Fosters and Carlton Draught.

The first Courage beer was a lager not radically different from the CUB products. It was launched with great fanfare and Victorian drinkers rushed to try it. Many pubs ran out. However, the initial enthusiasm didn’t last. CUB fought back, accused of using dirty tricks. Before long, a rumour began to circulate that Courage gave you diarrhoea.  Gradually, drinkers returned to their old CUB favourites.

The launch of Courage Beer was also a brave move in a market where the brewery giant owned so many of the pubs. This gave the company leverage with hotel operators who risked not having their leases renewed if they sold competitive products.

Courage persisted for ten years, making a loss in every year but one.  They introduced new products, like Ace Lager (a low calorie beer) and the “slow brewed” Tankard Bitter.

Courage Beer was one of the brands I worked on during my time in advertising. I wrote a radio campaign for Tankard Bitter that took a “bush poetry” approach. The bloke who voiced it was a genuine wharfie recruited by the recording engineer from a pub in Port Melbourne.  Imagine a gravelly voice declaiming: 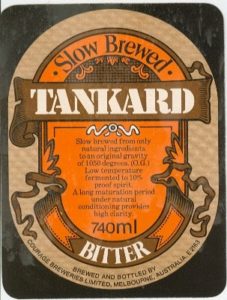 I was droving sheep on Dead Man’s Flat
If there’s a hell, it’d be like that,
The flies were like sparrers, the dust was red
You couldn’t see more than a food ahead.
I had dust in me eyes and dust in me mouth”
And I needed a Tankard to break the drought.

That big fresh taste really broke the drought
And that’s what a bitter’s all about
I can still remember when we hit town
The feel of the first one going down.
Now whenever I have me one or three
Tankard Bitter breaks the drought for me.

Despite these innovations (and my best creative efforts), the company never succeeded in capturing the imagination and the palates of Victorian drinkers. In 1978 Tooths acquired Courage, chiefly to obtain the production capacity offered by the Melbourne brewery. It wasn’t long before the Courage brand disappeared from Australian pubs and bottle shops.

In the 1980s, the beer market changed radically as entrepreneurs like Alan Bond went on brewery-buying sprees. Beer drinkers became more open-minded about new brands – a trend that continued as boutique breweries and craft beers became more popular. However, as late as 2012 XXXX Gold and Victoria Bitter held a quarter of the beer market between them.