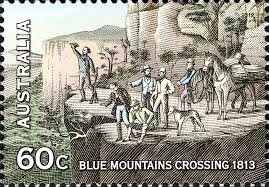 Where previous attempts at crossing the Blue Mountains  had followed the river valleys, the 1813 expedition followed a ridge-line. The party reached a mountain summit with a view of  forests and grasslands to the west.  Blaxland later wrote that the land they saw was rich enough to ‘support the stock of the colony for the next thirty years.’

The same year, Governor Macquarie directed the Deputy Surveyor of Lands, George Evans, to survey the track Blaxland, Lawson and Wentworth had followed.  He pushed on for more than 90 miles past the point reached by the expedition and discovered the Bathurst Plains. In 1814, work commenced on a road which was formally opened in 1815.

The first grant of land in the Bathurst District was given to one Maurice Charles O’Connell of the 73rd regiment, in March 1814. Initially, the new lands were primarily used for grazing. There were small farms and large estates, with the first windmill on the western side of the Blue Mountains being erected in 1824.

In 1826 it was estimated that 25,000 head of cattle and about 70,000 sheep were owned by the settlers. The district became famous for its cheese. Known as Rankin’s Cheese after its maker, a Mrs Rankin, it sold for up to one shilling a pound.