In a 1949 courtcase, a couple who claimed exclusive rights to sell ‘Pronto Pups’ sought to stop competitors from selling a similar product called the ‘Dagwood Dog’ at Sydney’s Royal Easter Show. The battered sausage on a stick was an American idea. Pronto Pups were introduced at the fairground in St Paul, Minnesota, in 1947, although ‘corny dogs’, which are essentially the same, are said to have originated at the Texas State Fair in 1938 (or maybe 1942, sources disagree).

Much as we’d like to claim the Dagwood Dog as an Aussie invention, the idea was definitely borrowed from the USA. In 1927, one Stanley Jenkins applied for a patent for a process that produced deep-fried, batter-coated food on a stick. It took a decade or so before the corn dog (or ‘corny dog’ as it was originally called) was offered at State Fairs – the US equivalent of our royal shows.

The couple seeking to protect their rights to sell the fairground classic at the Sydney Show were Roland and Betty Stegeman. They were a husband and wife team and a look at family history sites suggests that Roland, at least, was American. They had letters patent for “improvements in sausage goods” giving them the rights to manufacture said goods in Australia for 15 years, from 1945. The Stegemans claimed that their patent was infringed by Leonard Monk and Leslie Bowler, who were selling a similar product and calling it a Dagwood Dog.

In court, the Monk and Bowler product was described thus:

“A stick had been inserted axially in the frankfurt, leaving a portion thereof protruding. The frankfurt was then dipped and fried. When the batter had been cooked into a crisp brown covering the fried article was drained and a paper napkin wrapped around the portion of the stick protruding from the frankfurt and handed to me for the ticket I had purchased for 6d.”

The dispute was resolved when the Dagwood Dog crew agreed to pay the Pronto Pup vendors a royalty of a halfpenny for each axially penetrated sausage they sold. 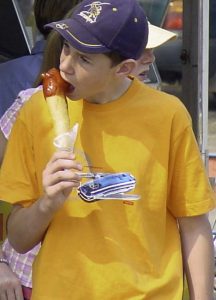 The item in question went on to become a fixture at city and country shows around Australia. It’s mostly called a Dagwood Dog. The Pronto Pup name seems to have disappeared, replaced as early as 1949 by the Disneyesque Pluto Pup. And in South Australia, where they do things differently, they’re called Dippy Dogs – a name that possibly has a Canadian origin, although some sources claim the Canadians call them Pogos.

The Dagwood Dog is named after a character in the American comic strip Blondie, created by Chic Young in 1930. Dagwood, Blondie’s comical husband, does in fact have a dog, Daisy, that features in some of the domestic debacles of the Bumstead household.

The difference between today’s Pluto Pups and Dagwood Dogs seems to lie in their place of manufacture. The Pups are mass produced in a factory. These days they’re made by US-owned Simplot who also make Chiko Rolls. History records a worrying episode in the early 1990s  when Pluto Pups began exploding in the deep fryer, with several people  reporting serious burns. Dagwood Dogs, however, are battered and fried on-site, resulting in a beguiling unevenness in the batter with lots of excess crunchy bits. There is no record of exploding Dagwood Dogs.

To complicated matters, there’s the ‘battered sav’ – also a favourite in the UK where saveloys have a history that goes back at least to the early 19th century. However, this fish and chip shop standard differs from the other deep fried, batter-swathed sausage snacks in one important way. It doesn’t have a stick. 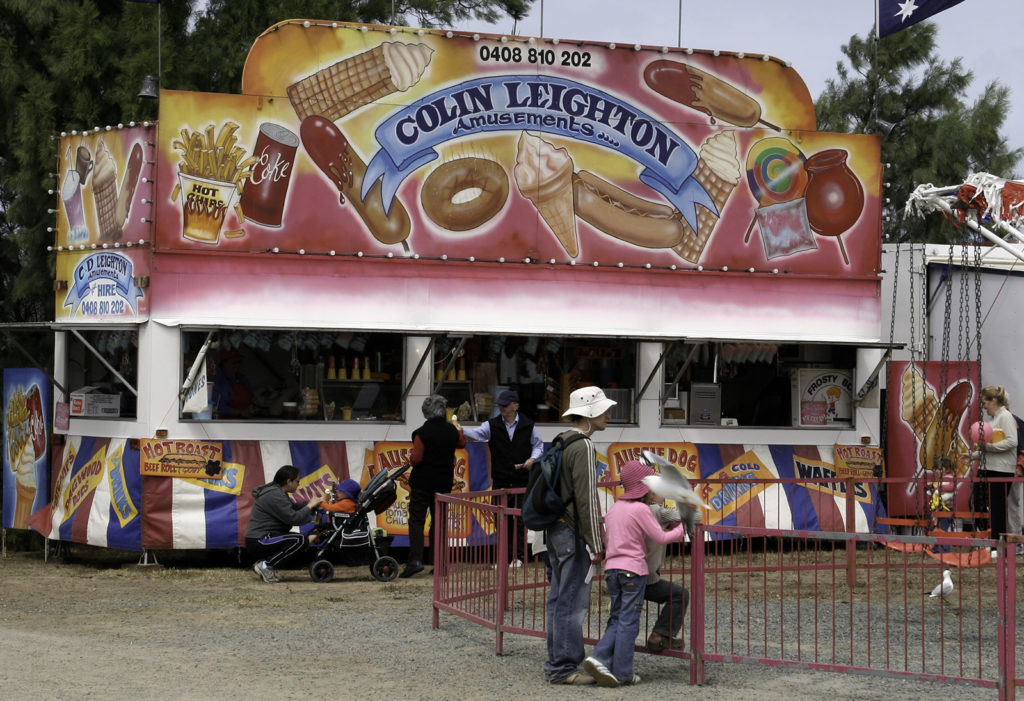 According to the Urban Dictionary, the well-known comedy team Roy & HG gave a new definition to the battered sav when commenting on the men’s gymnastics at the Sydney 2000 Olympic Games. According to them it was  “a move where a (male) gymnast leaps into the air, lands in a push-up position and touches his groin to the floor – thereby ‘battering’ his ‘sav’.” Perhaps we’ll let it rest there.