In 1918, beer prices became a trigger for what became known as the Darwin Rebellion. When an angry crowd marched on Government House it was the culmination of a series of beer strikes and protests against Administrator  John Gilruth’s failure to give barmaids in the government-owned pubs time off to celebrate the end of World War I. The Darwin beer rebellion resulted in Gilruth’s removal from his position. 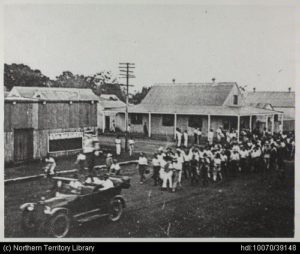 The Northern Territory – originally known as the Northern Territory of South Australia – had been administered by the  Commonwealth Government since 1911. There was no Governor as such – the Territory was run by an Administrator. From 1912 this post was held by John Gilruth, a Scottish veterinarian and university professor.

He was not the best choice. He had a blunt scientist’s manner that was seen by the locals as arrogant and autocratic. He soon succeeded in alienating the local union men, reducing wages and ruthlessly crushing industrial action.

Prior to 1918 there were years of union struggles and discontent about lack of representation in Parliament. But it was beer that brought the issue to a head. In 1915, the high-handed Gilruth nationalised the Territory’s pubs and raised beer prices. For three years, union members conducted a series of beer strikes, boycotting the government-controlled pubs.

When Gilruth refused to give his hotel workers time off to celebrate the armistice in November 1918, the
mood became ugly. On 18 December, a crowd stormed Government House, manhandled Gilruth and burnt him in effigy. He spent two months as a virtual prisoner in his residence, before being evacuated by the navy. After a Royal Commission, the Territory was finally granted a seat in the House of Representatives.  The Darwin beer rebellion was pronounced a success and the locals got back to their drinking.

Gilruth returned to veterinary research, at first as a private consultant and from 1929 at the Council for Scientific and Industrial Research (CSIRO). He became chief of the animal health division in 1933.