The Décor Insulated Wine Carrier with wine chiller was the essential accoutrement for visits to BYO restaurants. It was designed by Richard Carlson to hold two bottles of wine or four drink cans and had a removable chiller pack between the bottles to keep the drinks cold. Manufactured by Décor, an Australian homewares company, it was awarded an Australian Design Award in 1979 and the Prince Philip Prize in 1980.

Décor was founded by Brian Davis in 1958.  After working at his uncle’s toy company as sales manager, Davis spent a year at a California-based plastics company.  Returning to Australia he formed Décor, which was originally called Brian Davis and Co. Pty. Ltd. 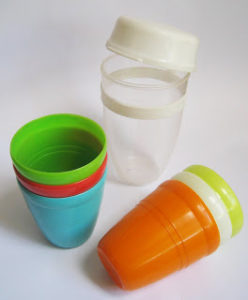 Although the Décor Insulated Wine Carrier is probably Décor’s most famous product, the company began with something much more humble. The Habana stacking beaker set was designed to compete with the anodised aluminium beakers so ubiquitous in the 1950s. The range expanded from there to include a wide range of household goods.

Décor first started exporting in 1960, and opened a manufacturing operation in China in 1980. However, as of 2016,  75 per cent of the company’s products were still manufactured in Australia.  In February 2017 Décor was acquired by the South African company Marlin Home.

Today there are over 500 products in the Décor range, including kitchen-ware, lunch and hydration, picnic-ware, garden-ware, baby products, brush-ware and other cleaning products. The Décor Insulated Wine Carrier remains in the range but is not shown in the Australian catalogue, and marked in the international catalogue as “by special order only”.

With the decline of BYO restaurants, sales have fallen away, but the website still points proudly to the fact that the cooler is included in the permanent collections of the Museum of Modern Art in New York and the Museum of Applied Sciences in Sydney. No mean feat for something Aussies used to tote a couple of chilled bottles or four cold cans to a Sunday barbecue.