Denny’s restaurants were another example of an American chain that tried to expand into Australia, but without success. The Australian franchise was owned by Ansett and the first Denny’s opened in the Melbourne suburb of Nunawading in 1982. In 1989 all the sites were sold to the English brewing company, Whitbread, and converted into The Keg steak and seafood restaurants.

Denny’s traces its origins to a Californian coffee shop called Danny’s Donuts, which opened in 1953. After a series of name changes and expansion into a chain of stores, it became Denny’s. From 1956, the stores began trading around the clock. The chain continues to operate more than 1700 restaurants around the world, serving breakfast, lunch and dinner 24 hours a day.

In Australia, Sir Peter Abeles, managing director and chairman of the transport empire Ansett, announced in July 1982 that the company would open a chain of Denny’s restaurants. The aim, he said, was “to fill the void between the upper market and the take-aways…to provide a licensed family restaurant for Australians”. The company aimed to open 26 restaurants in east coast capital cities, offering a broad menu ranging from around $3.50 to $6.50 for a main course. “The idea is that a couple with two children can eat out for about $20”, the new general manager told The Age.

The first restaurant opened before Christmas in 1982. In the American tradition, the menu featured a mind-boggling choice of more than 100 items. It seems the most popular late-night dishes were the seafood platter (fish fillet, breaded prawns and scallops) and the schnitzel Holstein (a veal schnitzel topped with a fried egg and a caper sauce), both at the top end of the price scale at $6.95.

By 1988, there were eight Denny’s restaurants in Victoria, four in New South Wales and three in Queensland. The company claimed it was aiming for 56 outlets on the eastern seaboard. By this time, the chain was employing more than 700 people in Victoria and the Nunawading restaurant alone was doing more than 10,000 meals a week. 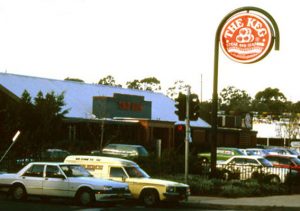 It’s not clear what went wrong, but just a year after trumpeting their expansion plans Ansett decided to quit the restaurant business to concentrate on transport and resorts. In 1989 all the sites were sold to Whitbread, who auctioned off all the fittings and equipment and opened the restaurants as The Keg in 1990. Whitbread already had a successful chain of that name in Canada where it continues today.

In an article about The Keg and its competitor Sizzler in The Age in 1993, Jane Freeman wrote:

Everything is accessible, from the mainstream menu to the casual service. There is no sense of being at a culinary temple, the chain restaurants are places for ordinary folk to gather, giggle and have a meal on the side … Everyone agrees that Australians are nervous when it comes to eating out. The Keg’s marketing director David Angus says Australians are “risk averse”. “Many people are frightened of top-notch restaurants. They want to go to places that are non-threatening, where they know they won’t be ripped off and where there’s friendly service they won’t have to wait 20 minutes to get noticed.”

Despite the early optimism, Whitbread also had a short run in the Australian restaurant business. By 1997 the chain had been sold to local owners. As dining habits changed The Keg eventually disappeared along with similar family restaurant chains.