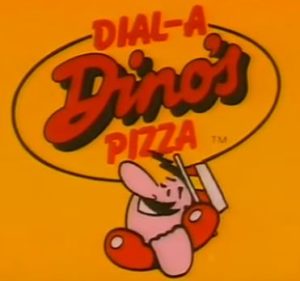 The Dial-a-Dino’s pizza business was launched in Adelaide in 1984 by local entrepreneur Richard Westcombe. It was the first pizza delivery chain in South Australia and expanded to have more than 100 stores nationally. The pizza delivery cars had an illuminated red telephone on the roof.

Dial-a-Dino’s had no eat-in restaurants and based its business model on home delivery. The bright yellow Daihatsu cars with the red telephone receiver on the roof were easily identifiable as was the Dino character with the big nose who graced the boxes.

In 1989, Pizza Hut’s owner, PepsiCo Australia, merged the company with the Dial-a-Dino’s network of home delivery units. The merger saw the end of the Dial-a-Dino’s brand and established Pizza Hut as the national leader in the pizza business. 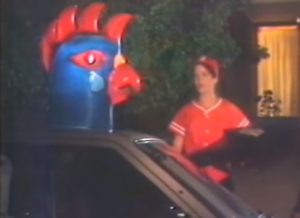 Another pizza chain, Pizza Haven, was also established in Adelaide in 1984. The chain was founded by the Christou brothers, Evan, Louis, Bill and Gabriel. Perhaps inspired by their competition, they also felt compelled to identify their cars with some kind of mascot. For no apparent reason they chose a blue bird’s head, described as the “Pizza Parrot” but looking more like rooster. Pizza Haven’s first store was at Glenelg.

Pizza Haven was around for longer than Dial-a-Dino’s, but was bought by Eagle Boys in July 2008. Eagle Boys was subsequently bought by Pizza Hut in 2016.