In 1999, entrepreneur Dick Smith launched Dick Smith Foods. The move was prompted by the increasing foreign ownership of iconic Australian brands such as Vegemite. The range of, mostly, spreads included Vegemite taste-alike OzEmite, jams, peanut butter and cream cheese spread. Products were promoted as being “as Australian as they can be”, as some ingredients were, of necessity, imported.

Dick Smith is a quixotic entrepreneur who made a fortune from the electronics stores he started in the late 1960s. Fiercely patriotic, he has been embroiled in controversy over his views on immigration, corporate taxation and foreign ownership of businesses operating in Australia. In founding Dick Smith Foods, he aimed to support Australian producers and create jobs in Australia. As his website stated:

Dick Smith Foods supports products which are produced by Australian owned businesses, which are Australian grown and made, and we support Australian owned companies which operate in a highly ethical manner. We encourage you do this by making the most powerful statement you can as a consumer, with your buying choices.

The profits from the sale of Dick Smith Foods were donated to charity. However, sales declined over time and in July 2018 Dick Smith announced that the company would close. He blamed Aldi, with its home brand products, for his company’s demise. 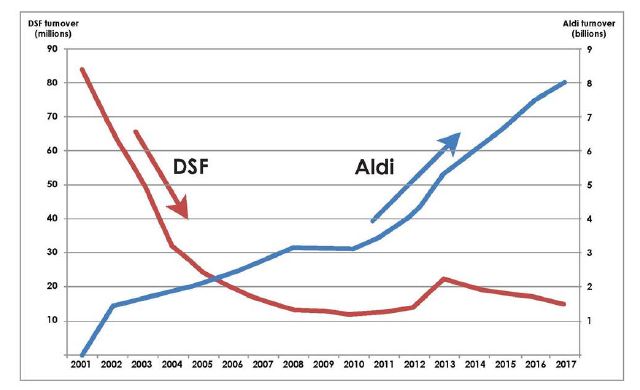 In an extraordinary letter announcing the closure to the managing directors of Coles, Woolworths and Metcash, he wrote:

The most trusted brand in Australia is now Aldi. Imagine a foreign owned, secretive (the owners never give media interviews), multinational company being rewarded like that. They have arrived in Australia relatively recently so they have played no part in creating this incredible democracy or contributing to our economic wellbeing over many decades – like your companies have.

He thanked the three retailers for their support and expressed a hope that they would continue to stock the lines that would continue to be produced, albeit under their own brands, by some of his manufacturers.  “It has become obvious to us,” he wrote,  “that very few Australians are prepared to pay extra to support Australian farmers, and fellow Australians being paid the higher minimum wages that we have here. It is very sad.”