In 2016, the revised edition of the Macquarie Dictionary included the term “double cut roll” for the first time. But this uniquely South Australian lunchtime treat had been around for more than nine decades by then. Double cut rolls actually have three horizontal cuts and two layers of filling, and are sometimes also sliced vertically, creating four sandwiches in one.

It’s not clear why the double cut roll evolved in South Australia, or why it has never been adopted elsewhere. The earliest mention I’ve come across so far is in a small classified advertisement in The News, Adelaide. It informs readers that the Gresham Ham Shop, at the rear of the Gresham Hotel, can provide sandwiches for 4d (fourpence) and double cut rolls for 5d (fivepence).

It seems that it took a while for inflation to hit the roll, as in 1930 the Blue Gum Cafe, opposite Foy’s in Rundle Street, had them available for 4d. It’s not recorded what the fillings were or even whether there was a choice. However, a former South Australian of my acquaintance has informed me that the fillings in the upper and lower portions of the roll must be the same – no mixing and matching. 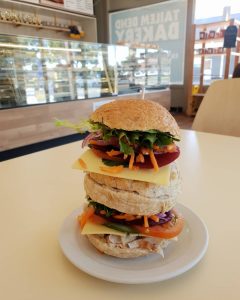 In 1931, as the Great Depression began to bite, prices dipped even further. The News was delighted:

What with double-cut rolls at threepence, sandwiches the same, and three-course meals a shilling, the epicure is happy again. Price cutting in the sphere of food suits the Adelaide diner. But 1931, when it comes to a cheap means of restoring the tissues, is still a far cry from 1911. Those, indeed, were the good old days, when pies and pasties were seven a shilling and a cup of tea twopence.

The double cut roll did make a brief appearance in Melbourne. The Advertiser ran a short piece on the subject in 1940:

Double cut rolls of ham, beef or anything the customer fancies have been on sale in Adelaide for such a long time that they have become completely commonplace. A holiday maker from Melbourne yesterday told me that in the ham and beef shops there they have now also been adopted, and placards proudly announce “Adelaide (double cut) rolls now on sale”.

It must have been a short-lived fad. Growing up in Melbourne in the 1950s, I never saw or heard of such a thing. In fact, it was only when swapping Adelaide stories with the afore-mentioned friend that I learned of their existence. The tradition is alive and well in South Australia, although not all examples are as challenging to eat as the towering version (from the Tailem Bend Bakery) illustrated here.