After running what he claimed to be Australia’s first soda fountain at Sydney’s Imperial Skating Rink, Earnest Hillier opened his store in Pitt Street where he began manufacturing chocolate. The signature red chocolate box appeared in 1916. A second factory later opened in Melbourne  and for many years the company operated a soda fountain at the Regent Theatre.

Ernest Hillier was born in England but migrated to America, where he operated a chain of restaurants in San Francisco.  Then, in 1906, a devastating earthquake destroyed 500 city blocks, including Hillier’s restaurants. The quake resulted in fires that burned for days and took more than 3000 lives. Hillier decided to move to Australia, where he secured the catering contract for Sydney’s Imperial Skating Rink and opened an American-style soda fountain.

He later opened another soda fountain in Pitt Street and in 1914 began to make chocolates. His operations expanded and Hillier’s chocolates were widely distributed, being sold in stores and by mail order throughout the country. Ernest was respected as a successful businessman and travelled widely to promote his wares and share his business expertise. 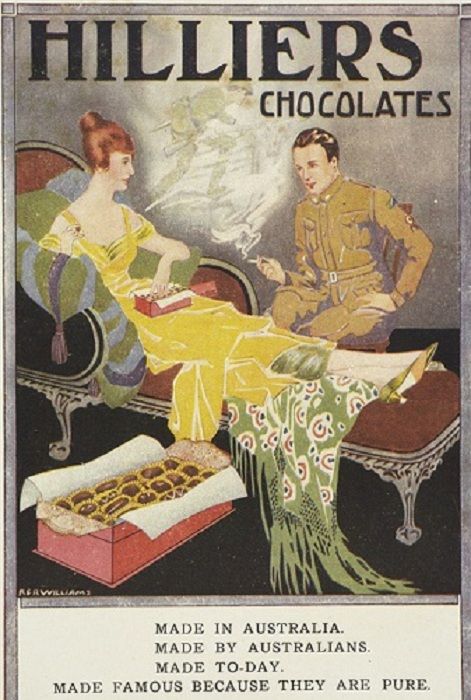 By 1934, Hillier was employing 750 people in his Sydney factory and a further 150 in a Melbourne manufacturing operation. The Melbourne company had a spot of bother with the law – in 1931 they were found guilty of selling chocolates containing too much alcohol. The 3.21 per cent of alcohol in their liqueur centres was more than three times the permitted limit of one per cent.

In the mid 1990s Hillier’s was bought by supermarket proprietors Piedimontes who expanded the business by acquiring the Newman’s Chocolate company, established in 1924.  The company was then sold to the British investment group Re:Capital but went into voluntary administration in 2015.

Hillier’s and Newman’s are now owned by Chocolate And Confectionery Company Pty Ltd –  located in Glendenning, New South Wales. It opened its doors in 2015 with the purchase of the brands and now has an estimated $9 million in yearly revenue.