The Foundation for Rabbit Free Australia (RFA) developed and registered the Easter Bilby campaign in December 1991. The aim was to raise awareness of the damage rabbits do  to native wildlife, and to raise money with royalties from Easter Bilby sales to fund  research programs. In 1993, Haigh’s Chocolates in Adelaide stopped making chocolate Easter bunnies and made the first Easter Bilby, donating part of the proceeds to RFA.

More recently the Easter Bilbies have been made by Fyna Foods, a company founded in 1947 and most famous for the Wizz Fizz sherbert bags. The Fyna Foods bilbies are 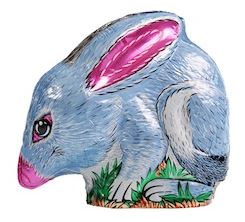 sold under the brands of Australian Bush Friends and Pink Lady and have been stocked by national chains including Target, Myer, David Jones and IGA as well as many other independent stores. They carry a swing tag confirming that the company donates to the Save the Bilby Fund. The Fyna Food bilbies are foil wrapped.

In the Australian Bush Friends range, Fyna also have chocolate Tasmanian Devils, Kangaroos, Koalas and Frogs. Sales of the characters are not restricted to Easter.

The Save the Bilby Fund was established in 1999 to raise money and awareness to help stop the steady decline of bilbies. The fund helps support bilby conservation initiatives including a breeding program and a “bilby fence” creating a predator-free zone in Western Queensland. Their website says:

Of the six bandicoot species that once lived in the arid and semi-arid areas of Australia, only the bilby remains. It is listed as ‘endangered’ in Queensland and ‘vulnerable’ nationally. It is the only surviving representative of the sub-family Thylacomyinae and one of the few medium-sized native mammals remaining in arid Australia.