The ‘Eat More Bread’ campaign was a response to a surplus of wheat in Australia. A promotional booklet was distributed free by bakeries. It was designed to increase the consumption of home-grown foodstuffs and assist the local wheat industry.

In 1930, with the Great Depression continuing to bite, the new Labor government tried to address Australia’s balance of payment problems by urging farmers to “Grow More Wheat” for export. Although this initiative was opposed by many, who saw it as a burden on the farmers, land under wheat was duly expanded to nine million hectares. Favourable rain led to a bumper harvest.

Unfortunately, the worldwide price of wheat fell and farmers were faced with selling the grain below the cost of production. The government had promised to guarantee the wheat price and that the banks would provide credit. However, despite the passage of the Wheat Advances Act, the Commonwealth Bank refused to finance the deal.

The situation was eased to some degree in 1931 by the devaluation of the Australian currency, which maintained prices at home but made the crop more competitive overseas. This helped farmers export their surplus and saved many from bankruptcy. 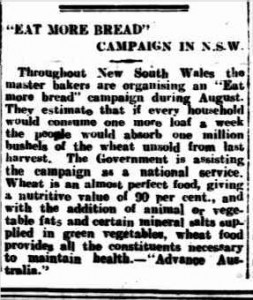 In the meantime, the Eat More Bread campaign was introduced, with government backing, to boost domestic consumption. It was estimated that if each household ate one more loaf each week, this would amount to one million additional bushels of wheat consumed. The cookbook distributed promised “75 Delicious Dishes Made with Bread”. The Agriculture Minister, Mr. H. V. Thorby, endorsed the campaign as a measure that would increase the consumption of home-grown products and reduce the consumption of imported articles.

A response to the campaign was published in the Shepparton Advertiser, from a correspondent who signed himself “No Dough”.

Mr. McLennan [the local baker, perhaps?] asks us to eat more bread. The public does not want to be told that. Very few people refuse to eat bread if they happen to be hungry and, most unfortunately, in this year too many of us are hungry.

He accuses the millers and of stopping flour supplies to cheap bakeries, and many bakers of making an unwarranted profit. The letter concludes with a verse:

The farmer toils from morn till night
To grow the golden grain,
The miller sees his humming mills,
And makes a goodly gain.
The baker bakes his snowy flour
And takes it on his round;
Consumers buy it sweet or sour,
At four pence for a pound.
“Eat more bread’ the millers sigh,
With tongues within their cheek;
“We want more bread”, the children cry,
Just one more loaf a week.
The cockies see the bailiffs loom.
Behind their sheds of grain;
The baker wipes his snowy hands,
And totals up his gain.