The el Bulli restaurant in Roses, Catalonia, under chef Ferran Adrià, was named best restaurant in the world by Restaurant magazine. Its elevation helped to focus culinary attention on Spain and fuelled a trend towards Spanish cuisine in Australia. El Bulli remained in the top three until its closure in July 2011 and claimed the top spot five times in that period.

In 1983, after running a military kitchen during his national service, Ferran Adrià was offered the role of chef de partie at el Bulli, a restaurant that had been run by Doctor Hans Schilling and his wife Marketta since 1964. Although he was only 22 when he joined el Bulli, Adrià became head chef 18 months later. In 2002, the restaurant was named the best in the world, a title it achieved five times.

Although Adrià was not a fan of the term molecular gastronomy, his foams, pearls and experiments with different temperatures and flavour combinations became legendary. As one reviewer (Food Tourist)wrote:

A visit to El Bulli requires a willingness to suspend the reality that eating is a basic fundamental of life, something we do in order to survive. There is little about a meal here that bears any relationship to notions of eating for living. It’s an experience that will give you sensual and intellectual pleasure, as far removed from eating to live as reading Kafka is to following a set of instructions on how to program a video recorder. The connection is there but it’s not immediately obvious.  (Sadly, the complete review is no longer online.) 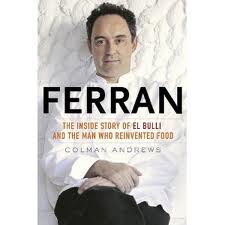 Dinners at El Bulli typically consisted of around eleven courses with some 18 different dishes in all. Securing a booking was almost impossible. When the restaurant closed in 2011 there was still a waiting list of 3000 disappointed would-be customers. The final dinner of 49 courses included dishes of ‘clam meringue’ and ‘gorgonzola balloon’.

Adrià no longer runs a restaurant although he has helped his brother open six of them in Barcelona. Instead, he teaches at Harvard university, consults to businesses, and runs the elBulli foundation devoted to “promoting innovation and creativity through the language of cooking” and preserving the legacy and spirit of elBulli for society.