It started as a marketing idea. The original recipe for the Empire Christmas Pudding was published in an advertisement developed by London ad agency H. P. Benson in 1925 and financed by the Australian Dried Fruits Board. It promoted dried fruits from Australia and, in following years, produce from other outposts of Empire. At the time, a post-WWI passion for Empire had inspired the 1924-5 Wembley Empire Exhibition which had royal patronage.

In 1922, the British Women’s Patriotic League had instituted an annual Empire Shopping Week, designed to encourage British housewives to buy products from what were politely known as Dominions but generally still referred to as ‘the colonies’.  At this time, in fact, most Australians were still British. And this persisted for a while. Until 1969 Australian citizens were still required to declare their nationality as British and it was not until 1984 that Australian citizens ceased to be British subjects. Little wonder that advertising for the Empire Christmas Pudding urged housewives to help in “giving employment to your own kith and kin” by supporting Empire produce.

The first advertising campaign was expensive. The full page advertisement on the front of London’s Daily Mail cost £1,400. A Queensland newspaper reported that the campaign didn’t stop there. “Copies of this advertisement were sent to retailers throughout the United Kingdom. Circular letters were also sent to dealers, wholesalers, and retailers. Showcards and recipe books were also made available,” the  Western Star and Roma Advertiser  told its readers. A giant version of the pudding, ornamented with both the  Australian flag and the Union Jack and flanked by a kangaroo and an emu, was paraded through London streets. 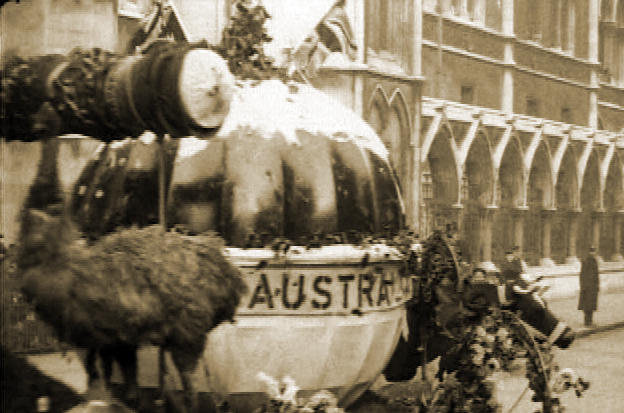 The first recipe, reported in a local paper for the benefit of fruit growers in the Riverland, highlighted only the Australian dried fruit, ignoring all other parts of the Empire.

Here is a Recipe for a Perfect Home-made, British-made Plum Pudding:-

Prepare the fruit, well mix the dry ingredients in a pan, add the beaten eggs and the liquid, and stir well. Put the mlxture into two greased basins, cover the top with a plain flour and water crust. Tie a cloth over the top, and boil for six hours. Boil for two hours when required. Or steam for eight hours, and two and a half when required.”

The Empire Christmas Pudding movement gained momentum the following year. A minor member of the Royal Family (Princess Marie Louise) was said to have signed a recipe at the Food Exhibition at the Olympia, a vast exhibition hall in Kensington.  And the concept was embraced by the new Empire Marketing Board. The 1926 recipe specified the national origin of each of the pudding’s ingredients, including Canadian flour, South African raisins, English or Scottish suet, Jamaican rum, Indian spice and an English threepenny bit “for luck”.  In an appalling gaffe, it omitted New Zealand. 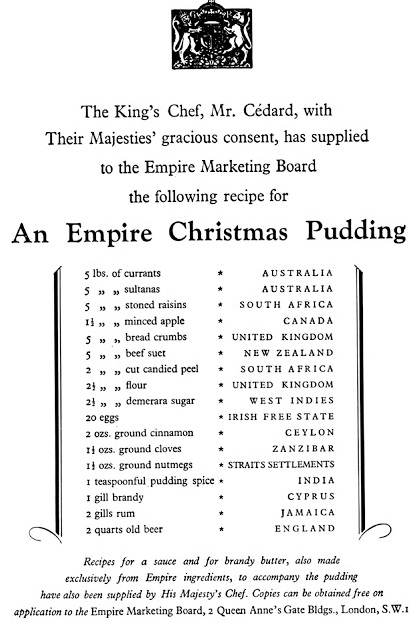 This  oversight was remedied the following year, when the King himself allowed his chef, Mr Cedard, to share the palace’s Empire Christmas Pudding recipe. This time the suet was to come from New Zealand and the recipe managed to include a few other Dominions, among them Ceylon, Cyprus and the Irish Free State. Unfortunately, the recipe produced a pudding big enough to feed 100 people, so it probably wasn’t seized upon by the average housewife.

An exhibition pudding was made, presumably to this recipe, in mid November. But disaster struck. When it was being iced (a mystery in itself – who ices a Christmas pudding?) the giant pudding split in half. The Marketing Board had to prepare another one, which took 20 hours to cook. There was another pudding parade. As the Northern Miner, Charters Towers reported:

The spectacle of two red shirted riding breeched men, shivering on a frosty December morning in the open seat of a car, bearing the placard “Australian dried fruits,” was witnessed in London streets in connection with the ceremonial of mixing their Majesties’ Christmas pudding, composed entirely of Empire ingredients. Pith helmeted and duck suited representatives of Jamaica, esconced (sic) behind a cask of rum, looked hardly less at home, while the Dominion Commissioners and officials, including Sir Granville Ryrie and Mr Trumble, appeared in silk hats and overcoats. The ceremony was organised by the Empire Day movement and culminated in the kitchen of Mansion House, where the Lord Mayor, in full robes, accepted the pudding and helped the chef to place it in the boiler. The Earl of Meath eulogised the use of the kitchen as a means of strengthening Imperial sentiment.

The promotion of the Empire Christmas Pudding continued into the 1930s but the Empire Marketing Board was wound up in 1933 when a system of tarriffs, known as Imperial Preference, was introduced to favour trade between Britain and its Dominions.  For more about Christmas puddings in general, including the Empire variety, see Ivan Day’s Food History Jottings. 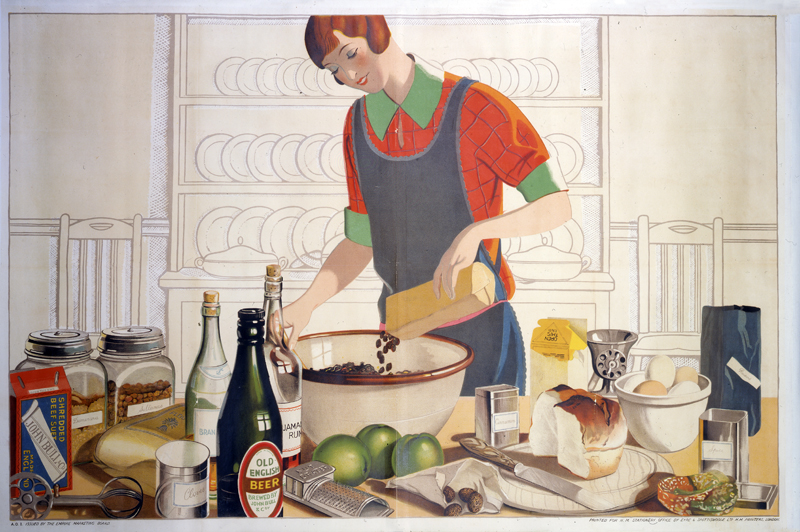