Emu Burgundy became Australia’s most significant export brand in the late 19th and early 20th centuries. In 1862, Patrick Auld founded a London company to import and sell wines from his Auldana vineyard outside Adelaide. It was to become the Australian Wine Company and, later, the Emu Wine Company, importing a range of Australian wines. In 1930 the Emu Wine Company  purchased a winery in Morphett Vale, South Australia. Acquired by Thomas Hardy in 1976, Emu Wines is now part of Constellation Brands which is wholly owned by the American private equity corporation Carlyle Group.

Patrick Auld was a Scot who established a wine and spirit business in Adelaide in the 1840s.  He bought property at Magill where, in the 1850s, he planted his Auldana vineyard. In 1862 he established the South Auldana Vineyard Asssociation and began exporting wine to London.

At this time, prohibitive duties between the Australian colonies made it more attractive to send wine to Britain than to neighbouring Victoria or New South Wales. By 1868, more than 700,000 gallons of Australian wine a year was making its way into the cellars and down the throats of drinkers in Britain, Europe and Canada.

Auld made several trips to London where, in 1872, he established Auld and Burton’s Australian Wine Company importing largely South Australian wines.  That year, The Lancet reviewed a number of Australian wines. The Auldana Ruby (selling for 30 shillings a dozen) got a thumbs up:

Of a ruby red colour, odour agreeable, claret-like, taste resembling claret, with an after-taste reminding one of port; subacid, astringent, but free from roughness and bitterness; full-bodied and flavoured and, of considerable strength in alcohol; altogether of the claret type, yet widely different, and altogether a very superior wine. 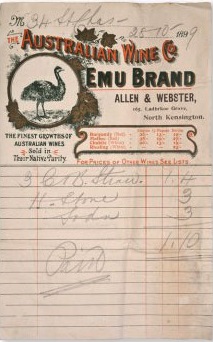 A representative was appointed in Australia to source wines for export. Many of these came from McLaren Vale on South Australia’s Fleurieu Peninsula. In fact, the growth of this area, according to at least one writer, was a result of the English trade. The Australian Wine Company registered the Emu brand in 1883 and later changed its own name to the Emu Wine Company.

The flagship product was the somewhat fraudulently named Emu Burgundy. For many years, European winemakers raised no objections to the theft of their regional appellation as long as the wine was called Australian Burgundy. It wasn’t until the 1980s that Australian wine producers stopped using the names of European wine regions to identify their products.

Emu Burgundy was likely a big, high alcohol red quite unlike French Burgundies, which are produced from Pinot and Gamay grapes.  Emu also exported a red from the Wirra Wirra winery in McLaren Vale under the name of Kangaroo Red.

In 1938, respected wine-maker Colin Haselgrove became Technical Director and Managing Director of the Emu Wine Company. Haselgrove led the company through a period of expansion after World War II, buying the Western Australian Houghton winery in 1950. The company was acquired by Thomas Hardy in 1976.

During the 1950s, catalogues from British wine merchants include a range of “Empire Wines” in which Emu Burgundy features strongly. On the occasion of Queen Elizabeth II’s coronation the company produced a special golden souvenir flagon. 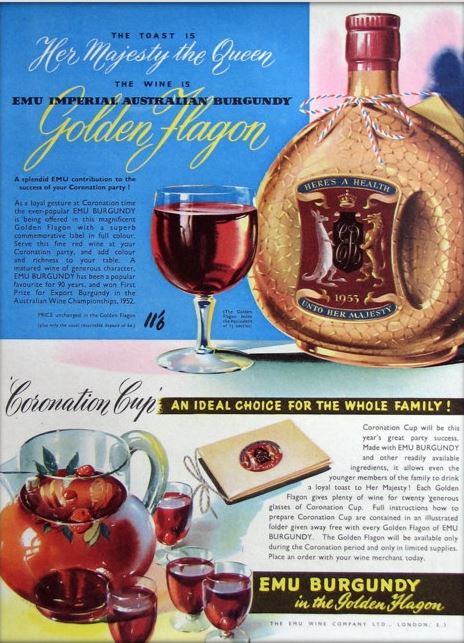