The Eskimo Pie – a foil-wrapped ice cream bar covered in chocolate – was invented by Christian Kent Nelson in Iowa USA in 1920. He franchised the product and by January 1922 Eskimo Pies were being manufactured and sold in Australia. What would become Peters Eskimo Pie was launched in Queensland in 1923 and Peters eventually owned the brand name Australia-wide.

The concept for the Eskimo Pie was an ice cream bar that could be eaten like a chocolate candy bar. Nelson patented his idea of covering ice cream with a candy coating, but the patent was invalidated in 1927. His business, the Eskimo Pie Corporation, was bought and sold by a string of corporates, with the brand ending up in the hands of Nestlé in 2007.

In 1922, Australian newspapers were reporting the success of the American product, claiming that Nelson was receiving over £5000 a week in royalties. Eskimo Pie (Australia) Ltd was established in New South Wales to manufacture the new ice cream, while the Newcastle Milk and Delicacy Company (makers of Victor Ice Cream) vigorously promoted its own version of the product in the local press. 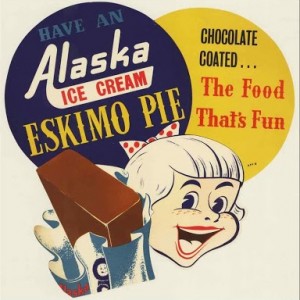 In South Australia, the Alaska Ice Cream Company announced in 1923 that it had acquired the rights to market Eskimo Pie. This company later became Peters Alaska Ice Cream Company. In Queensland, the Arctic Delicacy Company obtained the rights to Eskimo Pie and launched their product, also in 1923. This company merged with Peters American Delicacy Company in 1927, with the result that Eskimo Pie became a Peters product for the first time.

Eskimo Pie was introduced to Western Australia in 1929 by the Wattle Ice Cream Company. Wattle proclaimed that “The special Anderson Eskimo Pie Machine, which cuts, dips and wraps eighty dozen per hour, makes this delicacy a most hygienic product as it is not touched by hand during the process of manufacture.”

The ice creams were sold from trays at picture theatres and sporting events. One advertisement in the Maitland Mercury read:

ESKIMO PIE
CRAZE OF THE WORLD.

This delicious Chocolate Ice Cream Confection first came to light in America two years ago. It look America by storm. Everywhere you looked you saw it advertised. From America it swept like a cyclone through the world and duly reached Sydney January, 1922, and was duly snapped up by the Proprietor at THE POPULAR. The Sale of Pies is enormous, old and young, men and women buying them, eating them, and enjoying them.  They are eagerly asked for in the Picture Shows, and during interval at The Palace the ESKIMO PIE BOY is kept busy handing them out.

OBTAINABLE AT THE PALACE THEATRE CAFÉ AND THE POPULAR.

At some point in its history in the USA the Eskimo Pie acquired a stick and became more like the Australian Choc Wedge. However, in Australia it retained the original bar shape.