Farmers Union Iced Coffee is a flavoured milk manufactured in South Australia, where it has iconic status along with other local specialties such as frog cakes and pie floaters.  It is the only milk drink anywhere in the world to outsell Coca Cola in its home market and is now available nationally. The brand is now owned by Japanese company Kirin.

When Farmers Union Iced Coffee  was launched, Farmers Union was still a co-operative of South Australian primary producers, tracing its history back to 1888. The company was acquired by the Adelaide Steamship Company during the ‘corporate raider’ era of the 1980s. It became part of the public float of National Foods in 1991 and was later bought by Lion Nathan, which became part of the Kirin organisation in 2006. It is part of Kirin’s Lion Dairy & Drinks division. 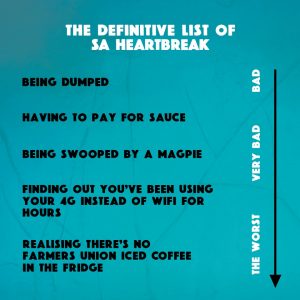 Farmers Union Iced coffee now comes in a range of varieties: Original, Strong and One (a low-fat version with no added sugar). It is Australia’s best-selling milk drink and continues to outsell Coca Cola two-to-one in South Australia. It has a “tradie” image and is particularly popular with men. Advertising for the brand has always taken a humorous approach and the long-running tag line is “It’s a Farmers Union or it’s nothing.” So popular is the brand that in 2019 a clothing line was introduced, with T-shirts, beanies and caps featuring the pack and the logo.

Early in 2019 there was panic as drought conditions had an impact on milk supplies and some sizes of the product disappeared from shelves. Facebook erupted with complaints, with one FUIC fan saying “I need a good scull, now”.