A survey commissioned by Canstar Blue revealed a list of supermarket brands Australians said they couldn’t live without. As the trend towards private label brands continued, Canstar Blue said only the most popular brands would survive. Only two of the top brands, Dick Smith Foods and Sanitarium, were Australian owned.

Most of the supermarket brands Aussies held dear are international. And even the so-called Australian brands are mostly owned by overseas companies. Arnotts, for example, was at that time owned by Campbells Soups (American). Uncle Toby’s is owned by Nestlé  Swiss). While the Bega Cheese company is Australian owned, the Bega brand cheese you buy in the supermarket is produced, not by Bega, but by New Zealand-based Fonterra. And in 2016 Vegemite still belonged to what used to be Kraft Foods, but became Mondelēz International (later bought by Bega). The complete list of brands was:

The trend towards private label brands had been accelerated by the success of Aldi, where proprietary brands makes up the bulk of their merchandise. This, of course, keeps prices down. 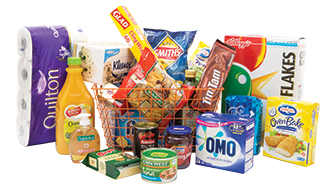 The consumer advocates CHOICE conducted a study in 2015 measuring the cost of a basket of 31 items at Coles, Woolworths, ALDI and IGA at 93 supermarkets across Australia.  The average price in Coles ($174.97) and Woolworths ($176.77) was much higher than in ALDI ($87.68). However, when popular supermarket brands in the Coles and Woolworths baskets were replaced by house brands, the costs reduced to $119.40 for Woollies and $114.24 for Coles. Aldi, with its house brands, still came out well ahead though.

CHOICE quoted a Nielsen survey that found private label groceries accounted for 21% of packaged grocery sales in Australia. What’s more,  many people believed most private label quality is as good as that of name brands.