Although a number of grocery chains were already offering self-service, it seems that in 1938 Farr’s of Newcastle, New South Wales, may have become the first Australian supermarket. Or, at least, the first Australian store to advertise itself as a “super market”. Farr’s offered self-service and a range of departments including a deli counter, fruit and vegetables, fish, confectionery and bakery goods. Beginning in 1923 in Newcastle, Farr’s Market soon had branches throughout northern NSW and in 1925 opened a store in Bondi Junction, Sydney. However, only the Newcastle store was ever promoted as a supermarket.

In November 1938, the Newcastle Morning Herald and Miners’ Advocate carried, under the heading of Business Notices, an advertisement from Farr’s Super Market in Hunter Street West, Newcastle. Heading a long list of Farr’s specials, and promising to “make that £ worth 25/-” was a little rhyme:

It is likely that this is the first time the term super market was used to describe an Australian grocery store, although the self-service model had been introduced here more than a decade earlier. Like many developments in retailing, it began in America when, in 1916, Clarence Saunders opened his first Piggly Wiggly store in Memphis, Tennessee. Possibly the first Australian business to experiment with self-service was the department store, Grace Brothers, who installed an “experimental” self-service food hall in their basement in 1921.

Also in 1923, the first Farr’s Market opened in Hunter Street West, Newcastle. Using the slogan “It pays to wait on yourself”, the store was immediately successful and Mr. R. Farr (Robert? Reginald?) soon opened another in the centre of town. Farr’s went on to have branches in country towns from Lismore and Glen Innes to Wollongong and Goulburn. The first Sydney store was opened at Bondi Junction, with another at Bankstown.

Like today’s supermarkets, Farr’s had many different departments including fresh produce. They also pioneered the idea of ready-cooked meals – in 1931 their Goulburn store included a “provision department” supplying cooked food.

The concept of the supermarket was much written about in Australian newspapers before the term caught on in this country. Many a traveller (usually female) returning from America waxed lyrical about the super-markets where everything for the kitchen could be purchased under one roof.  In Australia, certain pundits sniffed at the idea that the concept of the “so-called super market”  would work in Australia. “Conditions in Australia might not enable such a scheme to be operated so successfully here,” wrote the financial editor of the Brisbane Sunday Mail in 1935.

It seems that by 1937, managing a vast chain of stores became too much for Mr. Farr. Another chain, Owl Stores, took over the businesses in Kempsey, Casino, Lismore and Glen Innes.  Others were acquired by the local managers or other local businesses. In 1938, a notice appeared informing the public of the new arrangements:

R. FARR, the original FARR of FARR’S MARKETS, respectfully Informs his many customers in the northern districts: as the Company’s branches have all been closed, he is now operating personally FARR’S SUPER MARKET, 627 HUNTER ST., NEWCASTLE WEST. ‘

In name, if not in effect, this was the first Australian supermarket. Mr. Farr was on the premises and even offered to show customers around. However, it was not to last. In February 1942, perhaps struggling with wartime shortages and the rationing system, Farr’s Super Market advertised a closing down sale. It seems that the Bondi Junction business may have continued to trade under the Farr’s name, with the premises being sold in 1950 to Grocery and General Merchants Ltd. 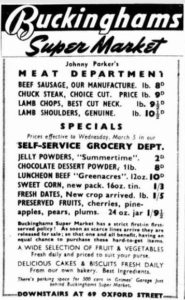 Grocery and General Merchants (later known as G & G) was an amalgamation of four large grocery chains, who proposed to alter the Farr’s premises to “a ‘super-market’ on American lines”. The firm had previously bought a site in Paramatta, and the Cumberland Argus‘s reporting of the sale daringly used “supermarket” – as a single, un-hyphenated word. The G & G group traded through difficult times in the early 1950s but ultimately owned a chain of stores in the Australian Capital Territory and New South Wales. It was taken over by Permewan Wright in 1961

Meanwhile, another claimant to the title of first Australian supermarket had arisen. Buckinghams was a large Sydney department store and in 1947 were advertising their super market “downstairs at 69 Oxford Street”. It seems clear that none of these stores was a supermarket as we understand it, with ample car parking surrounding the store.

In 1957, the Chermside Drive-In Shopping Centre opened in Brisbane.  It was surrounded by parking – “an island of shopping in a lake of car-parking” – and included a BCC super market, soon co-branded as Woolworth’s after they purchased the BCC chain.  This was, perhaps, the first modern supermarket. The self-service trend expanded exponentially through the 1950s.  Coles opened its first Australian supermarket in North Balwyn in 1960 and Australian shoppers have never looked back. 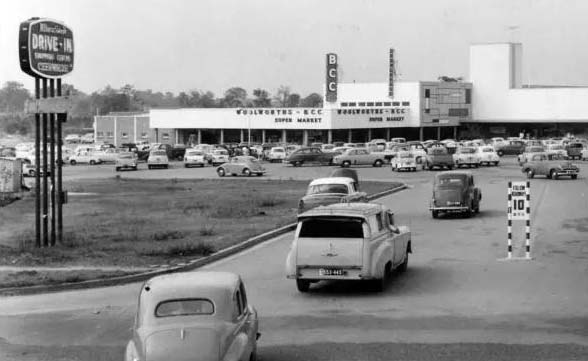