The first beer cans in Australia were made of steel and had to be opened with a ‘church key’ – an implement that punched a triangular hole in each side of the lid.  Cans initially had opening instructions printed on the lids. VB (Victoria Bitter) claims to be the first Australian beer to be released in a can. In 2011, VB launched a replica of its 1958 can using the original artwork.

The American Can company invented the world’s first beer cans in the dying days of prohibition. The first beer to be distributed in cans was Krueger’s Special Beer, a 3.5% lager which was the strongest beer that was allowed under prohibition. Their first brew was canned in December 1933. 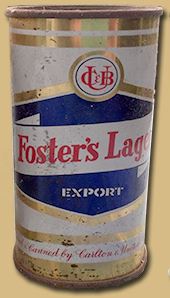 Carton & United Brewing were the first to release beer in cans, with Victoria Bitter beingclosely followed by Foster’s Lager. The other large Australian breweries didn’t start canning until the early 1960s.

The next development, in 1969, was the ring-pull can, first used by the Swan Brewery in Perth. The ring pull avoided the need for a can opener, but created a litter problem that was only solved with the pop-top that arrived in the mid 1970s. In 1970, Boags in Tasmania were the first to introduce light-weight aluminium cans.