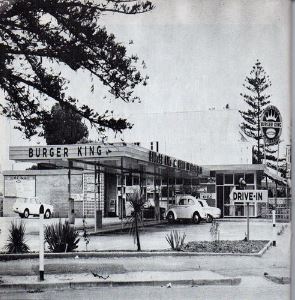 laide’s Burger King chain had nothing to do with the similarly-named chain in the United States. However, its founder, Don Dervan was American and was most likely aware of the US operation that was founded in 1953. Dervan opened his first Burger King drive-in hamburger restaurant in Adelaide in 1962, with waitresses on rollerskates serving customers in their cars. He eventually expanded his operation to 17 restaurants, mainly in South Australia.

Dervan had met and married an Adelaide girl in London and when the couple returned to South Australia he opened the first of his restaurants. Finding that the Burger King name was not registered in Australia, he snapped it up – a move that was later to cause a headache for the American burger chain when it looked at expanding into Australia.

The first Burger King was on a busy corner in Ashford, an inner suburb of Adelaide. Further stores were soon opened at Glenelg, the city, Unley, Port Rd, Marion and Elizabeth, and by 1970 the company was selling more than a million dollars worth of hamburgers a year.

Dervan seemed to have no hesitation about adopting ideas and even brand names from the American fast foods that so inspired him. A menu board from the ’60s shows Kentucky Golden Fried Chicken on offer for ten shillings. Half a chicken, along with crinkle cut chips, was served in a basket. Dervan even appropriated Kentucky Fried Chicken’s slogan” It’s finger-lickin’ good”.

Dervan’s Jumbo Burger offered a ‘Steak burger & melted cheese with sliced steak & special BarB-Q sauce & salad’ all on a toasted bun, for the bargain price of 5 shillings and sixpence.

When the American Burger King chain wanted to set up an Australian franchise, Dervan agreed to sell them his stores, but not the name. An alternative name was chosen by the Australian franchisee and the first Hungry Jack’s store was opened in Perth in 1971.

The Adelaide Now image gallery has pictures of the restaurants, Dan Dervan and even the roller skating waitresses.