The first canned soft drinks in Australia were produced by Tarax in their Huntingdale, Melbourne, plant in 1961. Initially, Tarax lemonade and orange were released in cans.  The innovation made soft drinks easier to transport and allowed Tarax to move into interstate markets, and the following year a second canning operation was started in Sydney. Tarax was acquired by Cadbury Schweppes in 1972 and the only products now carrying the brand are large bottles, mainly through supermarkets.

Tarax was founded in Numurkah, Victoria, in 1898 by English-born George Pethard. He was joined in his business by his son, also named George, and they moved their operation to Bendigo, Victoria, in 1902. The name Tarax was derived from the Latin name for dandelion: Taraxacum.  The original product was a herbal, non-alcoholic beer known as Taraxale. The original business ceased to operate in 1918 and George junior pursued other enterprises, before re-establishing the Taraxale brand in Melbourne in the early 1930s.

The revived company, known as Taraxale Brewing Company, went on to brew other non-alcoholic “beers” including Tarax Stout and Tarax Bitter.  A series of Tarax Bars were established in Melbourne, its suburbs and country Victoria, including at Shepparton, Echuca and Kyabram. The product range changed over the years. After World War II, the company concentrated on selling carbonated soft drinks rather than so-called “beers”.

Always keen marketers and innovators, the company was among the first to advertise on television, sponsoring the Tarax Happy Show (later the Tarax show) from 1957, just one year after the new medium arrived in Australia.  Tarax was also an aggressive acquirer of competitors, buying the operations of regional operators such as TeeVee soft drinks in Geelong. The rationale for the acquisition in that case was to take maximum advantage of the coverage area of Melbourne’s television, radio and newspapers.

In 1958, the company was listed on the Stock Exchange under the name of Tarax Drinks Holdings, with George Pethard junior as chairman.  Operations were confined to Victoria, until the introduction of Australia’s first canned soft drinks prompted a move into the New South Wales market. The launch was backed by an advertising campaign, focusing on the convenience of cans. 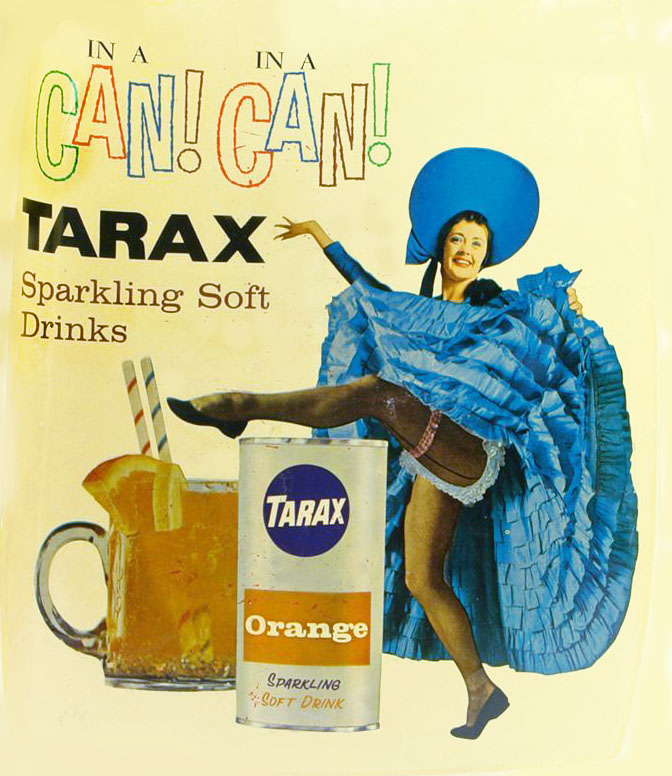 Under the headline of “Now meet sparkling Tarax in a can, in a can”, advertising in the Sydney Sun Herald in November 1961 read:

Tarax arrives – full of fruit juice and sparkling with fizz. And, man-oh-man, Tarax comes in gold-lined cans. Each flavour is sealed in at the very instant it reaches soft drink perfection, so Tarax is the freshest refreshment ever!
Space savers
You’ll fit a dozen cans on one shelf of your fridge; a carton in a corner of your car boot.
Quick chillers
See how soon the frost trickles down the side
No returns
Every Tarax can is brand new, so you toss away the empties. No more storage problems.
Introduce Tarax cans to the family next meal time, T.V. time, party time and picnic time. Your milk bar and food store has Tarax cans now!

Re-cycling was certainly not on the agenda in 1961! At that time Tarax was promoting its real fruit flavours, made from “Gosford lemons, Queensland pineapples and oranges from the South”. Its “top ten flavours” were Orange, Lime Flavor, Fruity Lemon, Lemonade, Pineapple, Root Beer, Soda Water, Dry Ginger Ale, Crimson and Cola.  The 1960s saw the company in its prime, continuing on the takeover trail. It became the last wholly Australian-owned soft drink company, but was acquired by Cadbury Schweppes in 1972.