For several generations of Australians, a visit to Coles Cafeteria was the highlight of a trip to the city.  Coles’ first cafeteria was opened in Store No. 12 – the flagship store and company headquarters constructed in Melbourne’s Bourke Street. Coles claimed it was Australia’s first in-store cafeteria, although other retailers including Boans in Perth had earlier provided tea rooms.

The new store, opened on 21 March, 1930, was Australia’s largest variety store, with more than 3000 items on sale. The cafeteria took up an entire floor and had seating for more than 1000 people. It was described as ‘truly a sight worth seeing, with its beautifully coloured tiled walls and artistic ceilings’. The concept was based on those Coles’ founder, G.J. Coles, had seen on a study trip to the USA some 15 years earlier.

According to Coles’ official history, “GJ [Coles]was extremely proud of the technical features of the cafeteria: two ‘subveyors’ – the first of their kind to be used in Melbourne – carried dishes from the cafeteria to the kitchen on the second floor. The main dishwasher, weighing two tons, handled 10,000 dishes per hour. The dishwasher, customers were assured, ‘sterilised all dishes, [which] passed through three lots of water.’ 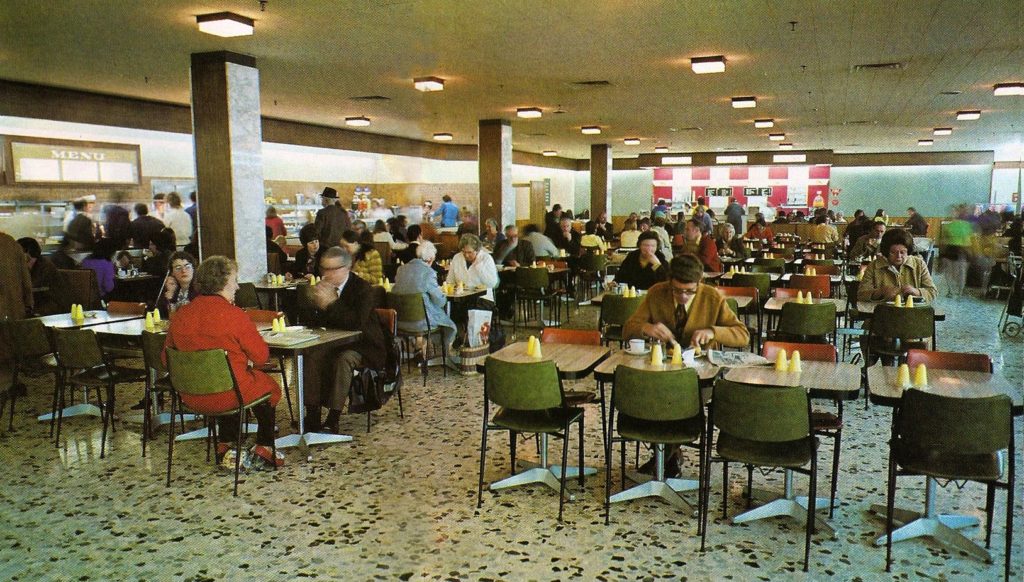 Cafeterias based on the Melbourne model were soon introduced in Coles stores in other capitals and major cities. During the war years, with many women in the workforce, demand for cafeteria meals increased. The cafeterias in the city stores were serving over 20,000 meals per day.

During the Olympic Games in Melbourne in 1956, the two city cafeterias were open for extended hours. A leaflet publicising the cafeterias had the hours of opening printed on the back in four languages – Italian, German, French and (for some reason) Dutch.

For later generations, the Coles Cafeteria seems to have a strong association with grandmas. The nostalgia factor is significant, with many penning thoughts such as this, from Adelaide:

“Oh yes I remember Coles cafeteria. The school holiday outing was called “going to town”. We dressed in our best clothes including a hat and gloves and after the shopping it was lunch at Coles Cafeteria for the 1950’s version of fast food. The desserts always looked like colourful jewels in their parfait glasses. Especially the jellied fruit, such a treat.”