The first colonists had a meagre diet. In the first year of  European settlement at Port Jackson, adults received a weekly ration of 7 lb of flour, 7 lb of pork or beef, 3 pints of peas, 6 oz of butter and 1/2 lb rice.  These rations were supplemented by any food the settlers could grow, and convicts were excused from work on Saturday afternoons so they could tend their own gardens. Public gardens were planted at Farm Cove.

The First Fleet brought livestock to provide food for the first colonists. Records say that this comprised seven horses, six cattle,29 sheep, 12 pigs, and a few goats. Later in 1788, a letter from Governor Captain Phillip to Lord Sydney, then Secretary of State for the Colonies, gives details of the numbers of each kind of livestock in the colony on 1 May, 1788. The summary is as follows: Horses, 7; cattle, 7; sheep, 29; pigs, 74; rabbits, 5; turkeys, 18; geese, 29; ducks, 35; fowls, 209. 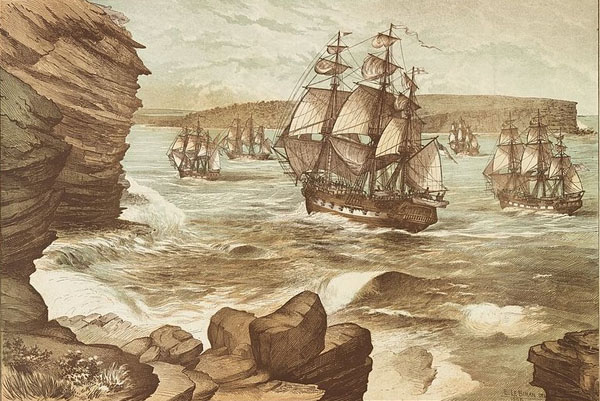 Captain Phillip had been instructed to begin cultivation of the soil “under such regulations as may appear to be necessary and best calculated for securing supplies of grain and provisions“.  However, the land at Botany Bay was found to be unsuitable for cultivation. Even when the settlement was moved to Port Jackson the soil in the area did not favour the growing of cereal crops. Another issue was that few of the first colonists had any knowledge of agriculture and animal husbandry. The first crop of wheat planted at Port Jackson did not germinate. It had been overheated on the journey and planted in the unfavourable weather of summer.

Within weeks of the First Fleet’s arrival, a party under the command of Lieutenant Philip King was sent to establish a settlement on Norfolk Island. Farms on the island were intended to supplement the supplies in Sydney Town.

The early settlers relied on fish, oysters and native animals and fruits to supplement their diet. They also traded with the local aboriginal people for game, especially kangaroo.