The first commercially available, Australian-made domestic refrigerator to operate without ice was produced by Edward Hallstrom in 1923. It used kerosene as a power source and was promoted as ideal for outback stations where ice was not available. According to Museum Victoria, Hallstrom introduced the ‘Silent Night’ which ran on electricity or gas in 1935. However, I have heard from Hallstrom’s great grandson, who says the Silent Night was, in fact, introduced in 1928.

Although Australians were among the pioneers of refrigeration in the 1850s, the technology wasn’t adapted for domestic use until many decades later. The first domestic electric refrigerator was sold in America in 1913. It had an air-cooled refrigeration unit mounted on top of an ice-box. The Frigidaire and Kelvinator brands date from 1918, when the first self-contained fridges were sold.

In Australia, Edward Hallstrom (later Sir Edward) produced his first kerosene-powered refrigerator in his Sydney backyard.  He travelled to outback stations to sell the machines. Many sources (including Wikipedia) refer to this early fridge as the Icy Ball.

However, its appearance seems to belie the name, which was much more accurately applied to a machine developed in America. Both worked on the gas absorption method using ammonia. These pictures show the refrigeration units only. The cold ‘ball’ would be placed inside an insulated chest

Ignoring Hallstrom’s appliance, the Coldstream company of South Australia claimed to have produced the first Australian domestic refrigerator, called the Ice-O-Electric, in 1926. It may have been our first electric model. However, they made only one and it was never actually sold. By 1926, American-made Kelvinator refrigerators were being imported into Australia, but were very expensive. Hallstrom introduced the Silent Night gas or electric-powered refrigerator and was producing more than 1200 units a week by the mid-1940s. It seems the Silent Night was cheap to produce but expensive to run, So Hallstrom negotiated deals with the local electric companies to give owners a subsidy.

The kerosene-powered refrigerator continued to be sold to country people where electric power was not available. The Sno-man model, produced by J. B. Chandler & Co., of Adelaide, South Australia, came in both upright and chest-style models. The upright version was decreed suitable only for temperate climates. 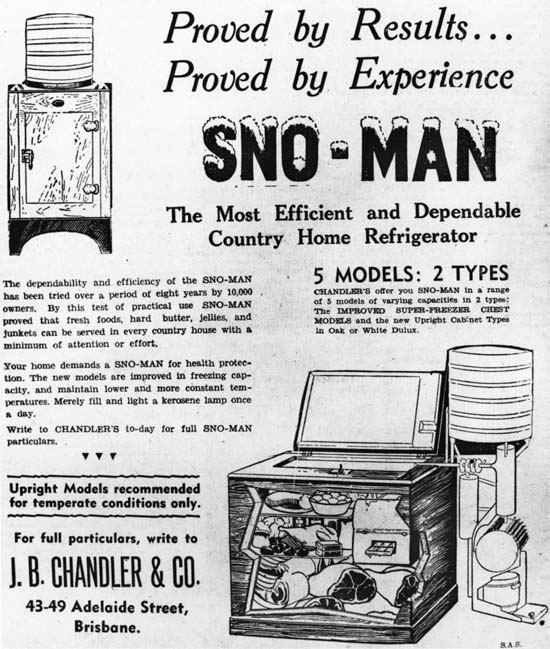 Many other Australian firms entered the market and American companies including General Motors, Kelvinator and Westinghouse established manufacturing operations in Australia. Although the old-fashioned ice chest lingered on into the 1940s and early 1950s, by 1964 an estimated 94% of Australian homes had a refrigerator.

Over the years the local factories have disappeared. In 2013, Electrolux announced that it would close its manufacturing plant in Orange, NSW, in 2016.  The factory was the last making fridges in Australia, producing the Westinghouse and Frigidaire ranges. The operation was relocated to Thailand.