In 1966, both Epicurean and Australian Gourmet  food magazines were  founded. Epicurean was the first Australian magazine devoted entirely to food and wine. It was the official magazine of the Wine and Food Society of Australia and its contributors included Len Evans, Dan Murphy, Mietta O’Donnell, Tony Bilson and Terry Durack. The art direction by Les Mason was dramatic. Australian Gourmet, now Gourmet Traveller, counted Margaret Fulton among its early contributors.

Epicurean took itself very seriously. Rather than glamorous pictures of food, it featured stories from well-regarded writers and a visual approach that pushed the boundaries…or, rather, ignored the boundaries….of conventional magazine design. The Financial Review, in a review of a 2010 exhibition of work by designer Les Mason, quoted author Marion Halligan: 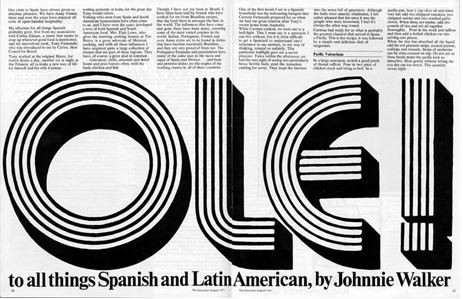 Epicurean was “a magazine of ideas”, says regular contributor Marion Halligan. “It didn’t just do beautiful coloured pictures of food, which, I think, almost taunt people – they say, ‘You’ll never make it like this’. It was, essentially, to do with food as something you thought about, that you had ideas about, that you played games with. And its designer, Les Mason, was playing games with his illustrations. In that sense, it was countercultural.”

The editor and publisher of Epicurean, Alan Holdsworth, described it as “a magazine dedicated to the greater enjoyment of wine and food”. Mason continued to design the magazine until 1979. The last edition was in 1996 after some years of erratic publication.