The Victorian Railways Refreshment Branch opened a stall selling freshly squeezed orange and lemon juice drinks at Melbourne’s Flinders Street Station in 1926. It was an initiative of the chairman of the Victorian Railways Commissioners, Harold Clapp. This was one of many innovations Clapp introduced to aid farmers and increase the railways’ freight business. He believed it was the Commonwealth’s first fresh juice bar.

Harold Clapp made many changes to the operation of Victoria’s railways and took a particular interest in catering arrangements. His decision to introduce the fruit juice bar may have had as much to do with boosting profitability as it did to improving the health of passengers. By encouraging the transport of fruit he increased the amount of freight the trains carried, while the fruit kiosks and juice bars were profitable enterprises in themselves.

The first juice bar opened on 2 November 1926 but it seems that the juices were heavily sweetened – a mixture of freshly squeezed fruit juice, sugar, syrup and soda. To be fair, they were advertised as “fruit juice drinks” rather than pure juices and in the 1920s sugar was still regarded as a healthy natural product. 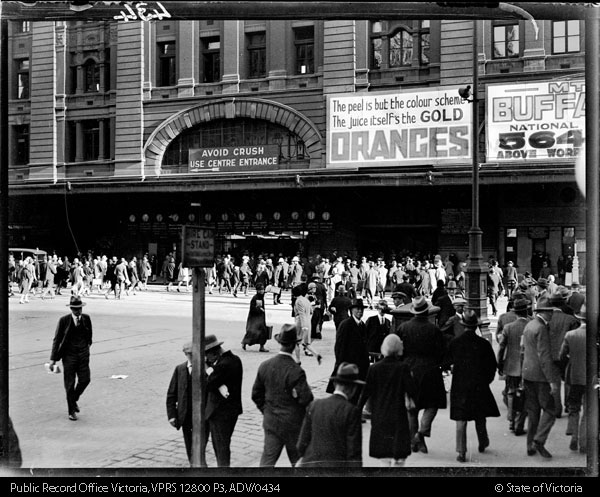 At the Flinders Street juice bar, patrons purchased tickets from a booth and collected their juice from the staff at the counter. Clapp insisted that all juice was freshly squeezed in front of the customer.  He was a believer in advertising, using billboards at the station to promote the juice bar, fruit stalls and his other big innovation: raisin bread.

Clapp’s achievements were not restricted to the railway’s catering arrangements. He modernised and reorganised the Victorian railways and was responsible for the introduction of the Spirit of Progress, described as “one of the world’s finest passenger trains”, which ran to the NSW border and later to Sydney. He also started cheap holiday excursions and established a children’s creche at Flinders Street.