The first Lebanese restaurant in Sydney was founded by the Mrough brothers in 1967 in Pitt Street, Redfern. Oddly, it was named Wilson’s. Wilson was the first name of one of the brothers, who had been named after US President Woodrow Wilson. The brothers were among the pioneers of Middle Eastern food in Australia.  The restaurant is still operating, and the current manager is a relative of the Mrough family, who later opened restaurants in Cleveland Street and Randwick .

The following article, by Dorothy McRae McMahon appeared in the South Sydney Herald in March 2009:

Wilson Mrouh and his brother Marcelle founded the first Lebanese restaurant in Sydney, on their arrival as immigrants, 51 years ago. At that time, they had to arrange for nearly all the ingredients they needed to be brought in by travellers from Lebanon, so novel was the Lebanese menu. On the wall of the restaurant now, you can see a page out of an old newspaper of 1967 on which is a write-up of the opening of the restaurant and a description of what was then regarded as its unusual food.

The restaurant was, of course, named after its founder. He was named after President Woodrow Wilson of the United States. Its present owner and manager, Pierre Perez, obviously has a French and Spanish name. However, everyone concerned was actually Lebanese born and bred!

After Wilsons was established, it rapidly grew in popularity. Many Lebanese came to live in the Redfern/Waterloo area when they first arrived, including Sir Nicholas Shehadie and members of the family of her Excellency the Governor of New South Wales, Marie Bashir. Wilson and his family bought a house in Great Buckingham Street. Quite quickly, other people living around them also came to enjoy the Lebanese food. Family members opened a second restaurant in Cleveland Street and later in Randwick.

Pierre Perez, a relative of Wilson Mrough, has been the manager of Wilsons for more than 30 years and runs it in partnership with his brother. He came to Australia in 1967, when he was 20 years old, and has made the restaurant a large part of his life. He sees it as central to his social life and works there for 16-17 hours every day of the week. He hasn’t had a holiday for 30 years!

There is a sense in which this commitment is related to traditional hospitality. When I last ate at Wilsons a couple of decades ago, I was there as the guest of the then Antiochian Orthodox Bishop Gibran. He had invited a group of church leaders to share a meal with him. He encouraged us to try all sorts of good food on the menu. When we finished and took out our wallets to share in the bill, the Bishop beckoned over a staff member of Wilson’s and said something like, “I assume this excellent meal will be on the house?” The staff member gave a small bow and replied, “Of course, Bishop”! In talking with Pierre, we learned that Bishop Gibran was a distant relative of his family and that hospitality of that type was part of the culture. 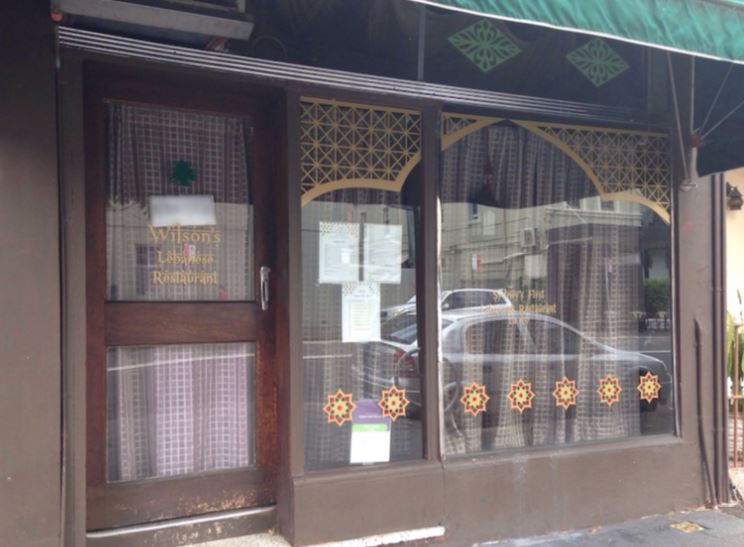 Those who frequent Wilsons now are often regulars and it is easy to feel from the atmosphere, and the way that Pierre relates to people, that he does see his restaurant as a place of hospitality. Little has changed over the decades in the traditional décor and food. You can eat in, or take away. Given its 51 years of serving the locality, it obviously must have something going for it. The prices are extraordinarily low for a Sydney restaurant – main meals for $12, for example! We plan to go back and eat there, even though we now live out of the area. Give it a try yourself!

Times have moved on, but Sydney’s first Lebanese restaurant is still going (as of time of writing in December 2017. These days, the main meals are a little more expensive, but not much. Just $14 will buy you one of the meat courses. The mixed plates are more expensive: $25 for a Mixed Meat Plate or a Mixed Vegetable Plate for one. But they include all the extras like hommos, baba ghannouj, felafel, cauliflower and lady fingers. And the Mixed Grilled Plate at $35 for two sounds like a bargain.

Recent reviews are mixed though. While some praise Wilsons’s for good Lebanese food at reasonable prices, others say the serving sizes have shrunk. And with all the competition these days, the first Lebanese restaurant may no longer be the best choice.