In 1978, Australia’s first McDonald’s Drive-Thru opened in Warrawong, New South Wales. This was just three years after their first American drive-thru, which opened in Arizona in 1975.  It’s suggested that the  Sierra Vista drive-thru was set up to cater to customers from the nearby military base who weren’t permitted to get out of their cars while wearing fatigues.

McDonald’s Drive-Thru wasn’t  the first burger chain in Australia to offer ordering, payment and pickup without getting out of your car. They were pre-empted by Hartees – a short-lived burger group founded by Kelloggs in partnership with the US-based Hardees burger chain. The first Hartees opened in Earlwood, Sydney, in 1970 and in 1972 four more stores appeared, with a revolutionary new feature: drive-thru.  In 1975, however, after a scandal involving dog food in one store’s hamburgers, the chain closed down. 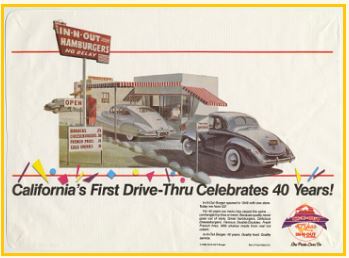 Even in the USA, McDonald’s was far from being in the forefront of drive-thru service. The concept had its origins in the ‘drive-in’ restaurant, famous for car-hops on roller skates taking and delivering orders to cars in the parking lot.  The first drive-thru burger joint,  Red’s Giant Hamburg on Route 66, opened  in Springfield, Missouri in 1947. The following year,  In-N-Out Burger in California became the first establishment to allow customers to place orders from a speaker stand, then pull up to a window to pay and collect their orders. And the first exclusively drive-thru chain was Jack in the Box, also based in California, opening in 1951. It took Macca’s another 24 years to catch up.

In Australia the drive-thru became an essential part of many fast food operations. History seems not to record when Kentucky Fried Chicken introduced its first drive-thru in the USA, or in Australia. But these days speeding through and grabbing a Twister or a bucket of chicken is something we take for granted. In 2019, the world’s first drive-thru only KFC opened in a suburb of Newcastle, with five drive-thru lanes.

Now everyone – including Gloria Jeans, Donut King and Coffee Club – are getting in on the drive-thru business. Convenience and time saving, it seems, are everything. Will the rise of home delivery have an impact on the drive-thru operations? That remains to be seen.