Small enough to fit in a shirt pocket, the Guides didn’t claim to be complete – encompassing ‘just over 5 per cent of restaurants’. They directed the reader to the Pink Pages (a forerunner of today’s Yellow Pages) to find more than 1000 restaurants in Melbourne or 3000 in Sydney. Kerr commented that “very few establishments have ‘settled down’ with long serving, highly qualified staff”. Restaurants were not rated – there were no stars, or forks or hats awarded, simply a description of the establishment and mention of a few typical dishes. 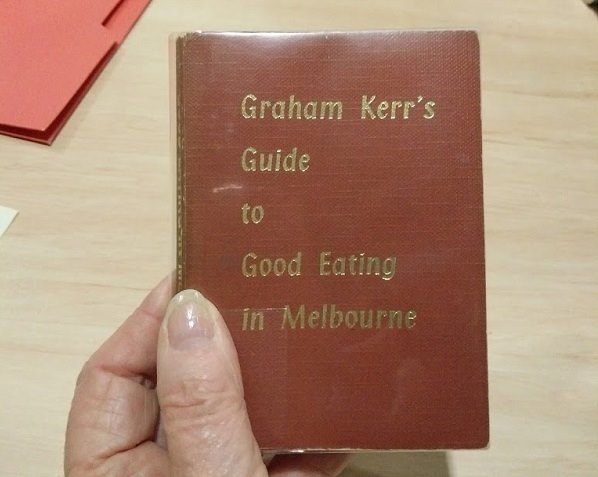 The restaurant guide noted the type of cuisine. Overwhelmingly, French was the style of the day for listed restaurants, with 15 in Melbourne and 25 in Sydney offering Gallic food. Many tried to have an each-way bet though, combining French dishes with other ethnic styles including Italian, Swiss, Argentinian,  Hungarian, Dutch and Greek. Sydney seemed more cosmopolitan with 36 different cuisine styles, including the only Indian, Hungarian, Kosher and Creole restaurants listed. Melbourne, on the other hand, had the only Russian establishment – the Troika Cabaret.  Many Melbourne establishments played it safe by calling themselves ‘International’, while Sydney preferred the slightly more exotic ‘Continental’.

Each entry  had another heading: Music. It’s astonishing, today, to see how many top-end restaurants in the 1960s offered music and dancing. A surprising number had live music, while recorded music was common. Melbourne’s upmarket Fanny’s though, was uncompromising. Music: nil, the entry reads. At Café Balzac, there was ‘no dancing’ while Café Eduard, a popular haunt of Melbourne’s advertising set, said ‘dancing permitted’.  (But perhaps not encouraged?)

The Cockpit offered a three piece band and vocalist. They even recorded there. Notes from the album Les Patching Trio at the “Cockpit” read:  ‘The “Cockpit”, one of Melbourne’s more imaginative night spots, overlooks the tarmac at Essendon Airport.  This gives it an intriguingly different atmosphere.  You enjoy superb food and wine; listen and dance to wonderful music – while just below you see giant airliners arrive and depart. The music comes from Australia’s top trio, led by Les Patching.’

The pocket guides did more than list the restaurants. They provided handy hints for reserving a table, a glossary of menu terms (all French), a guide to wine areas of Australia and even a guide to Australian cheeses.

Oddly, the State Library of Victoria has only the Sydney guide. To locate the Melbourne one, we went to the William Angliss college. There are only three Melbourne establishments from the first restaurant guide still trading today:  Vlados, Florentino and the recently revived Coonara Springs in the Dandenongs. We’ve yet to check on Sydney survivors, although Beppi’s soldiers on. Pruniers, nominated as Sydney’s best restaurant in 1968, closed in 2008 with Matt Moran subsequently opening the Chiswick Restaurant on the site.