1961 The first Tupperware party in Australia

Earl Silas Tupper introduced the range of plastic containers in the USA in 1946. Their trademark was the distinctive “burping” seal. In the early 1950s the Tupperware  party became the unique marketing method. The first Australian Tupperware party was held by Mary Paton in her mother’s home in Camberwell, Melbourne. Mary’s sister Ruth became the first Australian Demonstrator.

When Silas Tupper first patented his Tupperware range it was sold through department and hardware stores and was less than successful. Its eventual success and growth into a global giant with a sales force of around 1.9 million is attributed to the ‘party plan’ sales method introduced by Brownie Wise.

Wise joined Tupperware in 1951 after working for housewares company Stanley, a company that had already popularised home party selling. Despite her sales success at Stanley she was told that upper management was no place for a woman. At Tupperware, the party plan proved a huge success, because the in-home location allowed demonstrators to show how the seal worked. Soon the product was withdrawn from conventional retail outlets. 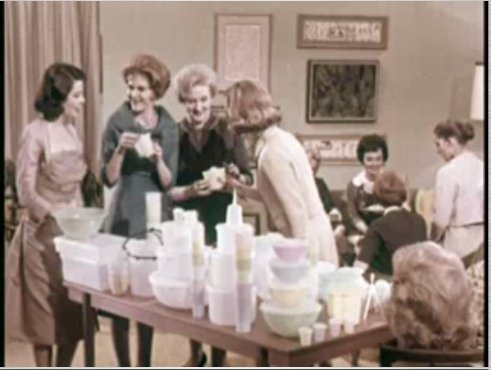 Wise wrote of the parties:

“The congenial atmosphere of a [party] is relaxing. All the guests are imbued with the group spirit of the party. The social spirit of a party tends to lower sales resistance of those present, as well as increase a competitive buying spirit. The buying spirit is contagious; it is a proven fact that you will sell more to a group of 15 women than you will sell to them individually.”

At Tupperware. Wise rapidly rose to become general sales manager of the new Tupperware Home Parties Division and, soon, Vice President. However, in the mid-’50s, amid falling sales and increasingly extravagant promotional efforts, Wise fell out with Silas Tupper. She was fired in 1958 and effectively expunged from the company’s history for decades.

The party plan, however, continued.  The Tupperware party gave generally house-bound women the chance to earn some money. It was promoted as ‘the modern way to shop’. The party model has since been extended to many product categories including lingerie, kitchen appliances, makeup, candles and cleaning products.

Today, according to a PBS American Experience documentary Tupperware is sold in about 100 countries, while “every 2.5 seconds, a Tupperware party is held somewhere in the world.” 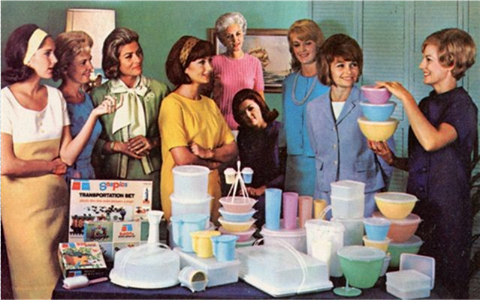