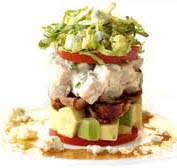 Someone who has seen (and done) it all posted this amusing summary of restaurants’ food presentation styles since the 1950s.  Eras include the Miniscule Era, the Gigantic Era, the Stacking Era, the Sprinkling Era and the Drizzle Era. The writer, George Hill, is clearly of the ‘old school’ and more than a little scornful about molecular gastronomy.

I present here a summary of chef and educator George Hill’s “Food presentation memories and milestones”, part of a paper presented to a teacher conference. It’s worth following the link to read the whole piece for yourself. (Be warned though – sometimes the site exceeds its bandwidth, so the link doesn’t always work.) The

Food was presented in a very rigid way, with glistening silver platters and the vegetables and starch always served separately.

Experienced chefs with a more cosmopolitan view of food preparation and presentation arrive in Australia for the 1956 Olympics, but  the first real shift in food presentation was in the ’60s. Every course had a garnish, often just a sprig of parsley, but other herbs such as dill, basil, oregano and chervil were little used. ‘Napping’ with sauce disappeared and sauces were served under food – very radical in its day.

With the arrival of Nouvelle Cuisine “the main item was centred in the plate surrounded by tiny, tiny items that were so small you felt almost embarrassed to eat them and most clients went home after a function or dinner to have a meal.” Also described as “children’s portions put on a plate by an interior decorator”.

Garnishing became a cult, roses from tomato skins, animals and birds carved from carrots, serviettes folded into flowers swans and dogs, and even the author was responsible for really some strange combinations and presentations like baby cantaloupe cut into swans and used as an entrée. Honey with blue cheese was a thing and every plate required a doily and an underplate.

The extra large plate syndrome, the author explains, was possibly a response to Nouvelle Cuisine when chefs started feeling guilty about placing normal size portions of food on a plate and so reacted by enlarging the plate so that the meal had a pseudo “Nouvelle” look.

In the Stacking Era everything was a ‘tian’.

Plates were liberally sprinkled with herbs and sweets dusted with sugar right off the edge of the plate. A challenge for waiters to carry plates without leaving a fingermark.

Colourful oils and sauces now were drizzled around the plate as the feature, driven probably by the marijuana and flower people. This era was to last quiet a long time and still is quite strong.

The same size plate era for entrée, main and sweet, with any sight of vegetables or starch removed from the main item, forcing accompaniments to become an on-sell item. Sweet plates with Pablo Picasso influenced features and styles using tuile paste, almond paste, chocolate twirls and other decorations to absolutely ensure that whatever it is was being served was either totally hidden or disguised.

A new realm of food presentation where every function served finger food that was not finger friendly. Usually a larger portion that than any robust mouthful can consume in one piece, or canapés that needed a plate, or an item that was served with a dipping sauce and a subsequent dribble onto a white shirt and the obligatory serviette.

THE INSANITY ERA IN COMBINATION WITH BACK TO THE FUTURE 2005-2010
Bizarre menu descriptions interspersed with inaccurate spelling and poor menu grammar plus a small band of advocates of molecular gastronomy who did terrible things to food in the name of innovation, recklessly suggest that a new culinary stream had emerged.

Hill concludes “We currently have entrées and mains that consist of a innumerable ingredients with many bewildering flavours and not one really distinguishable. We have contradictory, confusing, shoddily spelt [sic] and poorly described menu descriptions that sound better written, then [sic] eaten.

And last but not least courses, (often mains) served on a pureed concoctions and usually in a plate more appropriate for soup.”

NO WONDER RESTAURANT CUSTOMERS ARE CONFUSED.