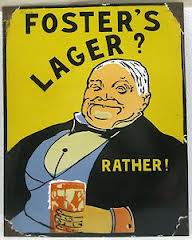 Although Foster’s Lager was not the first lager to be brewed in Australia (lager beer was first produced commercially by the Cohn brothers in Bendigo), the Foster brothers were the first to use an innovative refrigeration process. William and Ralph Foster were Americans. They produced the lighter, European-style lager that bears their name.

Until the 1880s, Australian beer was brewed in the traditional English style. It was dark, warm and heavy. The development of mechanical ice-making and refrigeration set the scene for a new style of brewing that had its origins in Germany.

The Foster brothers arrived in Melbourne from New York with the purpose of opening a brewery. They brought an expert with them – a German-American who had studied lager brewing in Cologne, Germany. The equipment and machinery for their brewery in Collingwood was imported from the U.S.A. Foster’s Lager was first brewed in 1888 and went on sale on 1 February 1889. Foster’s gave a free supply of ice to every hotel that sold their beer, ensuring it would be sold icy cold.

The venture was undercapitalised and the brothers turned the business into a public company and sold out within a year, returning to the United States. In 1894, Foster’s recruited a Belgian-born brewer and chemist, Auguste de Bavay who had been working for the Victoria Parade brewery. By 1895 production had increased and Foster’s were selling draught beer in over 40 metropolitan outlets.

Being served cold made lager a more appropriate brew for the hot Australian summers, so it’s not surprising that many other lager style beers were subsequently produced throughout Australia and lager soon became the dominant style. The first lager in Queensland was brewed at the Castlemaine and Quinlan brewery in 1889.

In 1907 the Foster’s brewing company united with the Carlton, Victoria, Shamrock, McCracken and Castlemaine breweries to form Carlton & United Breweries (CUB). The chairman of Foster’s at the time, a lawyer named Montague Cohen, was instrumental in negotiating the merger.

Foster’s continued to be sold in Victoria but was never the market leader. The Bazza Mackenzie movie in the 1970s lifted its profile and helped to make it the most significant Australian brand sold overseas, although still not particularly popular in its homeland.