Although the Fowlers Vacola name came later, Joseph Fowler began selling his home bottling kits in 1915. Initially, the kits were sold from a cart until the J. Fowler & Co. shop was established in 1920. Fowlers Vacola Manufacturing Co. Ltd. was registered in 1934 and the fruit and vegetable bottling kits became a feature of depression-era kitchens. 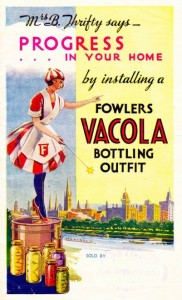 Joseph Fowler emigrated from England in 1913 and settled in Camberwell, a Melbourne suburb. He had previously had experience in a family fruit-preserving firm started by his uncle George Fowler. George is credited with the invention of field cooking stoves during his time with the British army. He patented a system of bottling and preserving food, which was sold successfully through his company Geo. Fowler, Lee and Co., Ltd. George apparently granted his nephew the rights to use his patents. Soon after arriving in Australia, Joseph set up a business selling his own preserves, as well as home-bottling kits containing a sterilizer, bottles, lids, rings and a thermometer.

The ‘Fowler’s method’ of preserving used the vacuum principle without need for chemicals. It relied on the natural acidity of fruits and the heating process to achieve a safe product. The filled jars were sealed with a rubber ring, lid and clip and heated for an hour in a boiler on top of the stove. The lids allowed air to escape during heating, but created a vacuum seal as the contents cooled.

Fowler’s kits became a household essential during the great depression, when it was so important to be frugal with food. In 1934 Fowlers Vacola Manufacturing Co. Ltd. became a public company. A cartoon character, Mrs B Thrifty, advertised the system. The company also produced many instruction books. As well as general advice on using the equipment, they included recipes for preserving everything from fresh and dried fruits and vegetables to meat, poultry, fish, sauces, fruit juices and cordials, soups and jams. 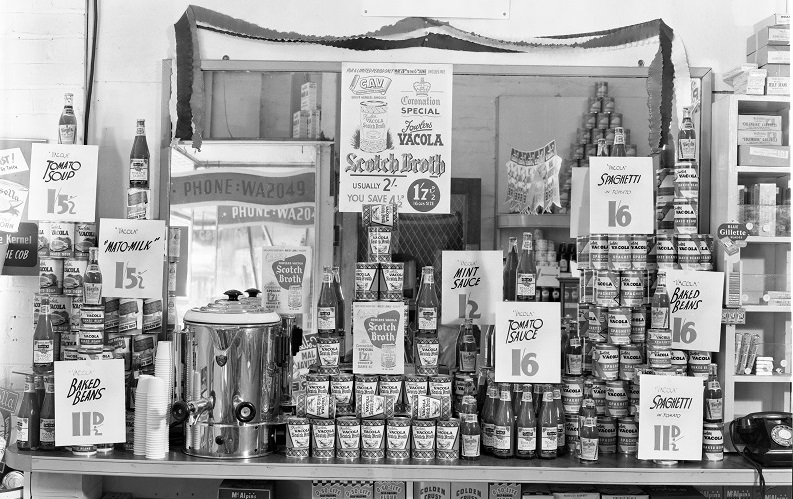 During World War II Fowlers Vacola manufactured canned goods for the military. This led to a new focus on selling canned and bottled food and the construction of a new factory. Joseph died in 1972 and, shortly after, so did his son. After this, the company changed ownership several times, went into receivership and, in the 1990s, was acquired by an investment group.