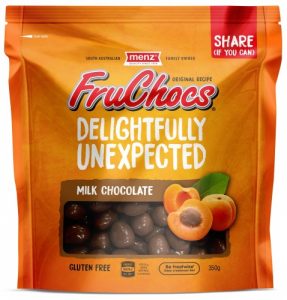 FruChocs, now made by Robern Menz, are unique to South Australia. Originally produced by  W. Menz & Co., biscuit and confectionery manufacturers, they have a chocolate coating over a dried apricot and peach centre.  Unsuccessful attempts have been made to launch the product nationally, but they remain a cherished treat in their home state.

W. Menz & Co. were originally biscuit makers, but branched out into confectionery with the launch of Menz Crown Mints in 1892. This seems to have been the main confectionery line until the arrival of FruChocs in 1948. The fruit-centred chocolates were designed to take advantage of surplus fruit from the Barossa and Riverland areas.

FruChocs were part of the Arnott’s empire for a time, when Menz joined with the Sydney-based biscuit company in 1964 to form Arnott-Motteram-Menz. When the Campbell Soup Company gained control of Arnott’s in 1992, they sold off the confectionery business to Robern, who already had confectionery lines of their own.

Along with other uniquely South Australian edibles such as frog cakes and pie floaters, FruChocs were named by the National Trust as as “an icon of South Australia” in 2005. Crown Mints remain Robern Menz’s best sellers and have been exported as far as Russia. However, attempts to sell FruChocs outside South Australia have been unsuccessful.

Their first interstate appearance, in 1990, was in Tasmania and Western Australia but it seems the locals in those states had difficulty in pronouncing the name and the venture was abandoned. In 2012, in an agreement with Coles, there was a second national launch. However, the name was changed to the distinctly unmemorable Choc Apricot Balls. These also seem to have vanished from the shelves.

In their home state, though, they continue to thrive.  There are lots of variations – milk chocolate, dark chocolate, white chocolate and even a vegan variety. There’s a Facebook page,  a FruChocs Appreciation Society and even an Appreciation Day.  In 2014, local juice and dairy drink company, Nippy’s, launched a FruChoc flavoured milk .  The first batch sold out in a day.