The concept of the glycemic index was developed by Canadian Dr David Jenkins in 1980-81.  His research showed that some starchy foods could have similar effects on blood sugar to simple sugars, depending how quickly they were absorbed.  Although other books preceded his, Rick Gallop popularised the GI Diet as a means to weight loss with a series of books, the first being published in 2002.

When Dr Jenkins and his colleagues at the University of Toronto set out to find which foods were best for people with diabetes, their findings upset some traditional views on healthy eating. For years, our nutrition guidelines had been based on the “food pyramid”. This had nasties like fat and sugar at the top (eat least) and fruit and vegetables at the bottom (eat most). The problem was with the second-bottom rung – complex carbohydrates. We’d been told to dig in to pasta and rice, bread and potatoes. Wrong.

Suddenly the worst, the very worst, thing you could eat was mashed potato. Apparently this was digested in an instant, sending great jolts of sugar into your bloodstream, which bamboozled your pancreas and all your cells. As a result, you couldn’t process the sugar and it was promptly converted into fat and re-routed to your belly. The same thing happened when you ate white bread, white rice, most kinds of pasta and anything made with white flour. Suddenly we had a new diet mantra – cut the carbs.

The glycemic index is a numerical way of describing how carbohydrates in foods affect blood sugar levels. The index measures how quickly a 50-gram serving of a particular food converts to sugar. To put it another way, in the words of the Glycemic Index Foundation, the Glycemic Index (GI) is a relative ranking of carbohydrate in foods according to how they affect blood glucose levels. Carbohydrates with a low GI value (55 or less) are more slowly digested, absorbed and metabolised and cause a lower and slower rise in blood glucose and, therefore usually, insulin levels.

For two decades, the glycemic index idea was largely confined to the scientific community. Then, in 2002, a book by another Canadian resident, Rick Gallop, brought the concept to public notice. Gallop was an advertising and marketing executive who became President and CEO of the Heart and Stroke Foundation of Ontario. His first book, published in 2002, was a result of his own struggle with weight gain. He went on to write many books about the glycemic index. 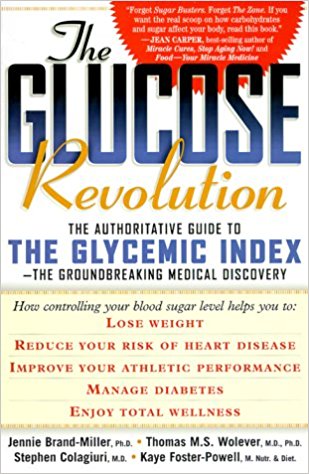 In 2003 an American cardiologist, Dr Agatston, published The South Beach Diet, which further popularised the idea of the low GI diet. I tried the South Beach Diet and it worked. The first two weeks were hell – no bread, no biscuits, no fruit, no alcohol. But the kilos peeled away. The next month was easier and for the best part of a year I stuck to the “maintenance” program. Then, as you do, I started backsliding and I’ve never had the willpower to go through the whole regime again. Dr Agatston’s book stayed on the best-seller lists for 96 weeks in 2004 and the GI diet  principle was here to stay.

Australian researchers have also made a significant contribution to the understanding of the glycemic index. Jennie Brand-Miller is now a Professor in the School of Molecular Biosciences at the University of Sydney. In 1999, she and her associates published a book with the somewhat unwieldy title of The Glucose Revolution: The Authoritative Guide to the Glycemic Index–the Groundbreaking Medical Discovery. But it was her 2004 book,  The Low GI Diet  that became the Australian ‘bible’ on the subject.  She has since published many more books and leads the Sydney University group that tests foods to determine their glycemic index.