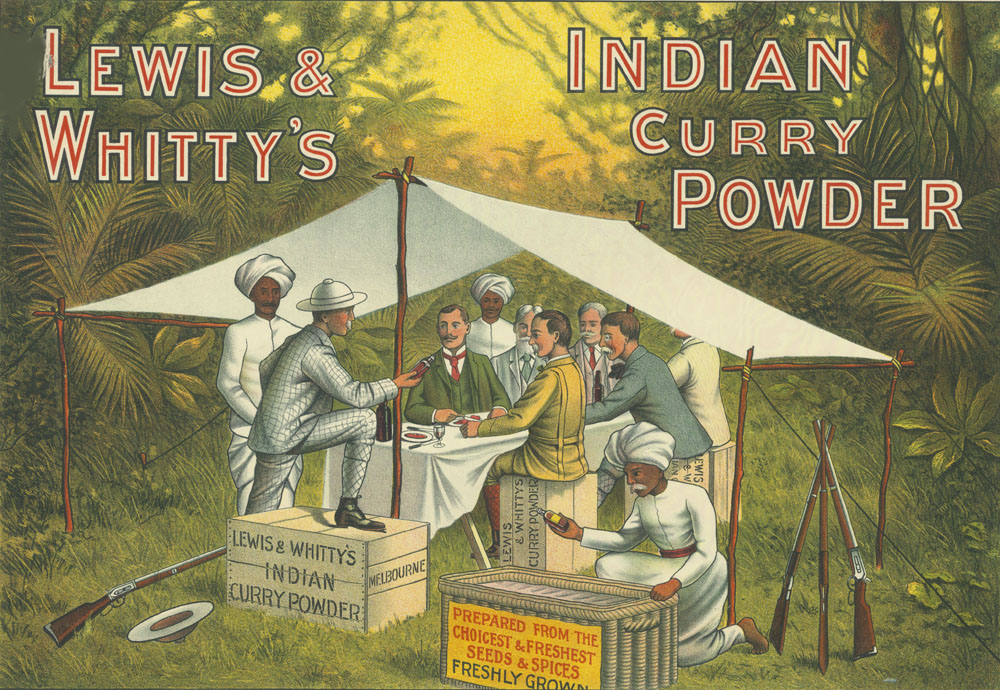 My mother’s curry was not a gourmet’s delight. It consisted of the diced remains of the Sunday roast, reheated in a glutinous green sauce along with onion, sultanas and, on occasions, sliced apple or banana. The curry powder was always Keen’s, invented in Tasmania in the 1850s and notable for its lack of heat.

Whipping up a curry was not a sign of multiculturalism in the 1950s. Indeed, curry had been part of the British cookery tradition since the 18th century, when Brits posted to the colonial outpost of India embraced spicy local dishes. It’s thought that the first curry powders were made up by Indian merchants for sale to returning ex-pats, avoiding the need to procure and grind a wide range of spices.

In Australia, curry powders were being imported from the very earliest days of the 19th century. Australia’s first home-grown cook book, compiled by Tasmanian Edward Abbott in 1864 under the name of The Aristologist, included warnings about shop-bought curry powder and gave his own recipe. It was a blend of mustard seed, coriander seed, turmeric, black pepper, cayenne, cinnamon, cloves, and mace.

Curry, it seems, was a way to make even unfamiliar produce acceptable. Journalist and author Marcus Clarke wrote in 1874:

A curry of kid, mixed with three eggs, the white of a cocoanut scraped to a powder, two chilis, and half a dozen slices of pineapple, is, as Falstaff said of Dame Quickly- ‘a thing to thank god on’. The small river crayfish are excellent material; while he who has never eaten a young wombat treated with coriander seeds, turmeric, green mango, and dry ginger, has not used his opportunities.

Many people are disgusted at the mere idea of eating the white wood grub which the blacks are so fond of. As a matter of fact, there is nothing nasty or disgusting in these soft white morsels, any more than there is in an oyster. It is all a matter of taste…I have never tried them in a curry, but feel sure they would be excellent.

Various proprietary brands of curry powder were available, including the locally blended Keen’s Curry, invented by the eponymous Mr Keen at his grocery store south of Hobart. It went on to win prizes at intercolonial exhibitions and became an essential ingredient in Tasmania’s famous scallop pies.

The firm of Lewis & Whitty was established in Melbourne in 1868, originally as manufacturers of laundry requisites. The following year the range was expanded to include boot blacking. By 1896 the company had factories and works in Richmond, Fitzroy and Clifton Hill, as well as a head office in Melbourne’s Flinders Lane, and was making baking powder, curry powders, salad oils, culinary essences, knife polish and Seidlitz powders (laxatives). Many of the products, including laundry starch and boot blacking carried the brand name Diamond.  “There is not a household where their name is not known,” wrote the Weekly Times in 1896.

In the early 1920s the company was sold to J. Kitchen & Sons, who joined with Lever Bros. to form Lever & Kitchen in 1962. Today that company is known as Unilever Australia.

Frieda Moran’s thesis on the significance of curry in Australia can be found here.