The first cling wrap was invented in America as a new use for a substance named Saran, originally discovered in 1933 by a worker at the Dow Chemical company. The sticky film was a plastic called polyvinylidene chloride (PVDC) and its first use was as a protective spray on fighter planes. It was later used on car upholstery and even as a lining for soldiers’ boots. 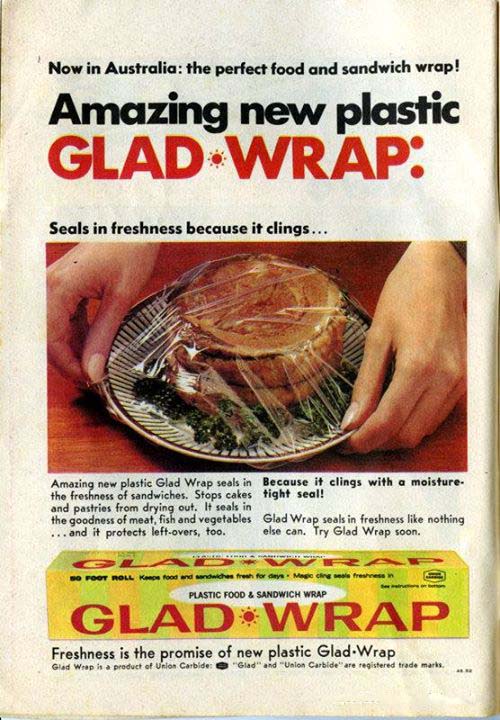 Saran Wrap was introduced for commercial use in 1949 and first sold for household use in 1953. “Saran” is still the generic term for cling wrap in America and many other markets. It helped keep food fresh because it created a barrier to oxygen and water. However, concerns about the safety of having PVDC in contact with food subsequently led to changing the composition of Saran Wrap, which is now made of polyethylene.

GLAD® Wrap was invented in Australia by a research chemist, Douglas Lyons Ford, who worked for Union Carbide at their plant in Sydney. However, its first appearance was in the United States in 1963 as a competitor to Saran Wrap. GLAD® Wrap was made from polyethylene, which was somewhat more porous than PVDC but deemed safer for use with food.

Both GLAD® Wrap and the resealable plastic GLAD® Bags were launched in Australia in 1966. The wrap was the first cling wrap in the Australian market.  It was promoted with a competition for people to suggest the best use of the new wrap, a competition won by Lady Casey, wife of the then Governor General. She suggested using GLAD® Wrap to cover the hors d’oeuvres for garden parties until ready to serve – a tip no doubt invaluable to the average Australian.

In Australia, the GLAD® brand was acquired by Ron Brierley’s Industrial Equity Limited in 1988 and then floated as part of National Foods in 1991. In 1997, First Brands acquired the GLAD®brand from National Foods, thus consolidating worldwide ownership of the brand. The brand was then sold to the Clorox Company, best known for their cleaning products.