By the mid-1940s,  the pineapple industry was well established in Queensland. To provide marketing and financial stability, a cooperative was formed to finance the building of a cannery.  Golden Circle Cannery was opened at Northgate in 1947. The company was originally called Queensland Tropical Fruit Products, using “Golden Circle” as a brand name.

Over 900 growers originally bought shares in the co-operative. Excess fruit produced at any time of the year could be canned, evening out fluctuations in production and demand and providing  stability for the industry. The Queensland Government was so enthusiastic about the new enterprise that it sent the future Queen Elizabeth 500 cases of canned pineapple to celebrate the occasion of her marriage in London. 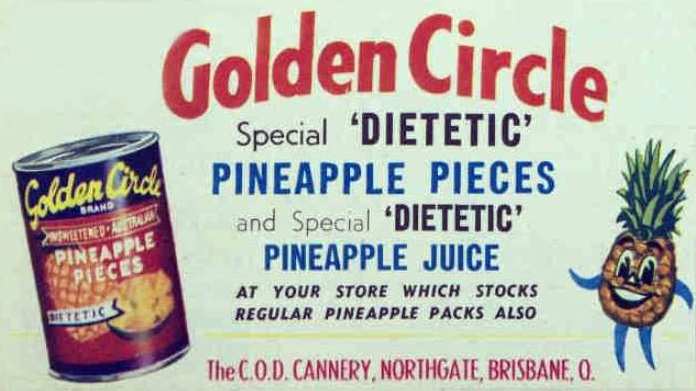 Golden Circle’s  first products were canned pineapple and jams. In 1948 the company began to produce canned paw paw, pineapple jelly and citrus cordials and tropical fruit salad.  In the 1950s pineapple juice and other fruit juices were introduced, with canned beetroot marketed nationally from the 1960s. And, of course, it was important to keep in shape, so you could enjoy dieting with the unsweetened “Dietetic” products. 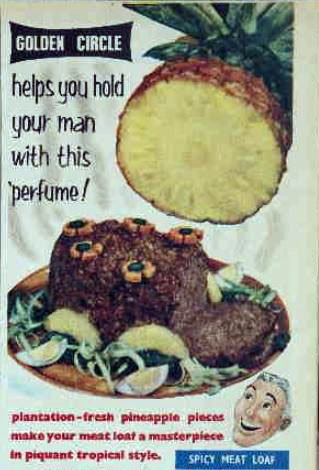 Advertising for the brand consistently took a recipe approach, encouraging housewives to use pineapple in cooking. In the 1950s it was all about keeping your man happy, with headlines like “Lure those man-eaters with pineapple promise”. It even promised to save marriages, saying “Golden Circle helps you hold your man with this perfume”.

Advertising regularly appeared in the Australian Women’s Weekly and the magazine did much to support the company. Pineapple, fresh and canned,  had been featured in many previous recipes competitions but in the early 1960s, the pineapple recipes that emerged from the Leila Howard kitchen specified Golden Circle pineapple rings, crushed pineapple or pineapple pieces.

Golden Circle became an unlisted public company in 1992.  In 2003 the Cannery Board bought the rights to The Original Juice Company in Griffith NSW. This proved to be an unsound investment and in 2007 Golden Circle was forced to sell 35% of the organisation to a US equity company, the first sale of shares to anyone other than the growers. In 2008, Golden Circle became wholly owned by Heinz.