The Green and Gold Cookery Book  was one of the earliest ‘charity’ cookbooks and was compiled as a fundraising initiative of King’s College (now Pembroke School) in Adelaide. These cookbooks tended to be a ‘who’s who’ of local society, as local matrons contributed recipes. The Green and Gold Cookery Book has had close to 40 editions and sold more than 500,000 copies.

Dog-eared copies of this classic cookbook  can be found in households all over Australia. Many have even emigrated to Canada, the United States and Britain. The full title of the early editions was The Green and Gold Cookery Book: containing many good and proved recipes /​ issued by Combined Congregational and Baptist Churches of South Australia, in the interests of King’s College. 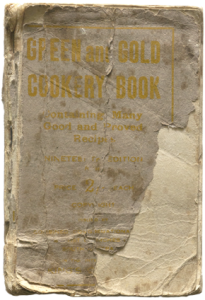 My copy is the nineteenth edition, issued in 1944. The preface written by Annie Sharman, who conceived the idea for the first cookbook, begins:

“This Edition of the Green and Gold Cookery Book goes to press on the eve of the coming of age of King’s College. Congratulations to King’s and best wishes for the future.”  She goes on to thank the women who helped the book come into being and the advertisers, some of whom had not missed an edition.

Like many cookbooks of the era, the Green and Gold is heavy on cakes. There are 26 recipes for sponge and layer cakes, 36 recipes for small cakes, 70 recipes for large cakes and 70 recipes for biscuits and shortbreads. Jams, jellies and marmalades occupy another substantial section of the book.

The organisation of the book gives us an insight into eating habits of the time. “Breakfast dishes” include Brains in Batter, Liver and Bacon, Kidney Savoury and Crumbed Sausages as well as the usual ways with eggs. “Luncheon dishes” include more egg dishes, home-made Camp Pie, Fricasse [sic] of Sheep’s Tongues and the classic South Australian Fritz Sausage. In the “Meats” section, the offal-fest continues, with recipes for kidneys, curried or stewed and ox tongues boiled or in jelly. Rabbit also features repeatedly.

If all that offal made you bilious, the Green and Gold had you covered. In the chapter on “Remedies” the Cure for a Bilious Attack was given as the juice of a lemon, one-half teaspoonful carbonate of soda, and two tablespoonsful of warm water.

The instructions for cooking vegetables like beans and cabbage for 20 minutes might make us wince, but Mrs G. Roach’s Cornish Pasties or Miss M. Treasure’s Cherry Meringue would be perfectly acceptable today.

Many other charity recipe books followed the Green and Gold format. The Herald Recipe Book, printed in 1933 as a fund raiser for Melbourne’s Queen Victoria Hospital, was compiled by Mrs E. Drake-Brockman of Clendon Road, Toorak, wife of a Melbourne judge. The book retailed for two shillings and carried introductions from Lady Isaacs (wife of the Governor-General), Lady Irvine (wife of the Governor of Victoria) and Enid Lyons (wife of the Prime Minister). The Herald Recipe Book is notable for a whole chapter of rabbit recipes; “underground mutton” clearly featured on even the highest tables at the time.

The current edition of The Green and Gold Cookery Book was published in 1999 and is known as the 75th anniversary edition. I guess they were a year late getting it to the printers. 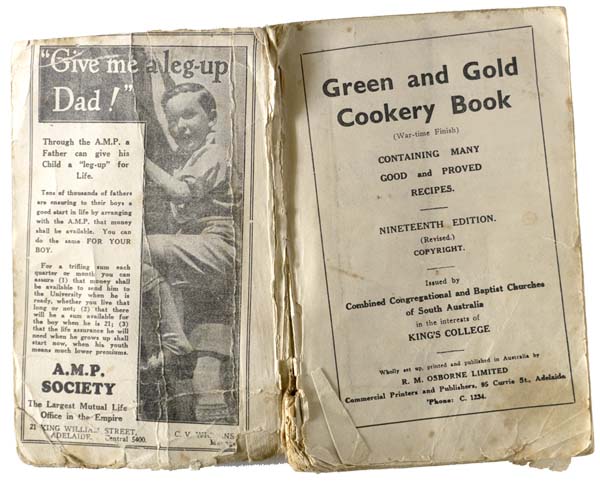