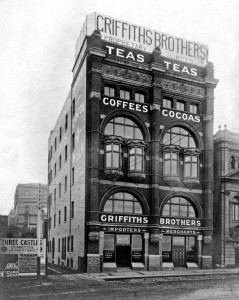 Although others had earlier experimented with tea growing – notably the Cutten brothers at Bingil Bay in North Queensland – James Griffiths succeeded in producing significant quantities of Australian-grown tea in the Dandenong Ranges outside Melbourne. Griffiths Brothers established one of Australia’s first coffee and tea distribution businesses in 1879.

James Griffiths was one of two brothers who emigrated from England and established a successful business in Melbourne. James lived at Ferndale, a large house with extensive gardens and farm areas in an area of the Dandenongs called The Basin. There he experimented with growing tea.

Tea-growing in Victoria had been advocated as early as 1875 by the government botanist Baron Ferdinand von Mueller. However, the difficulty was the cost of labour. This became a particular issue after Federation in 1901, when the new white Australia policy put an end to the importation of cheap labour from the islands or Asia.

Griffiths was not the first to produce locally grown tea in Victoria. A newspaper account in 1901 credited an earlier producer from Narre Warren with being able to sell his Australian-grown tea for seven shillings and sixpence a pound in Melbourne.  The same article quoted the Griffiths, who concluded that “the labour question” was the main impediment to local production.

‘We lately made some tea’, they say, ‘from our own plants, of which the broken Orange Pekoe was very choice, fresh and flavory ; the Pekoe and Souchong also being of a good useful character. We have made tea which liquored better than any than has ever been imported into the colony from India or Ceylon. Though we are aware that this quality may have been somewhat of the nature of a fluke, yet we hope to do so again, as we have a new flushing ready for picking. The labour question is the only one that stands in the way of tea being grown here in sufficient quantities to pay.’  (Traralgon Record)

Griffiths’ Australian-grown tea was exhibited in Adelaide in 1901. However, it seems that the labour issues were never resolved and local cultivation was not pursued. James Griffiths and his wife were killed in a railway crossing accident in 1925.

From the middle of the 19th century, strenuous efforts were being made to promote the quality of Indian and, later, Ceylon teas over those from China. The British had established the tea industry in their Asian colonies after trade with China became difficult owing to the opium wars.

By the late 19th century, Australians were drinking more tea than people anywhere else in the world. A newspaper report by one J. O. Moody in 1883 put the figure at 18 million pounds of tea a year, or 6.61 pounds for every man, woman and child. This put them well ahead of Britain, at a mere 4.5 pounds per head.

Tea was promoted as a mild and comforting beverage. ”Tea as a popular beverage is steadily spreading all over the world. Probably it is the most harmless solace that can be taken, and is credited with promoting thought and sobriety. Indeed, it is “the cup which cheers and not inebriates.”   So wrote Mr Moody in the Williamstown Chronicle.

Not everyone agreed. In 1895, the Bendigo Independent published an alarming article on Intemperance in Tea. It claimed that New York doctors found that at least 10 per cent of their patients were suffering from what they termed “tea drunkenness”. The writer admitted that “The tea drunkard is not a violent character as, on occasion, the alcoholic drunkard is. It has not yet been proved that a man has murdered his wife, or vice versa because of a long bout with the teapot.”

Australian-grown tea, Chinese tea, Indian tea – whatever the origin, Australia remained a nation of tea drinkers well into the 20th century, when instant coffee began to make inroads into the habit of generations.