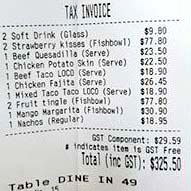 The Goods and Services Tax (GST) was introduced, providing another incentive to eat at home. Food for human consumption was exempt, but take-away and restaurant food incurred the 10% GST. It was another blow to the restaurant industry where many were forced to absorb some of the price increases to maintain custom.

“Food for human consumption” apparently didn’t include biscuits or many other supermarket items deemed to compete with take-away foods. The full list of foods that were not deemed tax-free was:

The definition of prepared meals was complex. It applied to any food that directly competed with take-aways or restaurants, needed refrigeration or freezing for storage, and was marketed as a prepared meal but was not a soup (soup was GST-free). A frozen lasagna was deemed pre-prepared, as it only needed heating. But a tin of baked beans, which also only needed heating, was not regarded as pre-prepared because it was in a can and not frozen.

All food served in restaurants attracted the new tax.  In 2008, a report prepared by Restaurant and Catering Australia on productivity in the industry highlighted the effects of taxation, including the GST, on restaurant businesses:

The taxation system has an in-built bias against productivity in the restaurant and
catering industry. The introduction of Fringe Benefits Tax in 1987 saw an immediate halt to much of the corporate expenditure in restaurants in Australia. This was exacerbated in 2000 with the introduction of GST when non-deductable meals became 10% more expensive as input credits were denied.

This damper on demand means that mid-week lunches are no longer. As a result, the capacity of most restaurant businesses to hold full-time service staff is limited.